That’s not really very interesting or insightful, even if it would have succeeded in ticking the “best parts of the day” box before the day was even half-done. But let’s be honest, brevity is never my thing, so I was contemplating writing some thoughts on certain types of uncomplicated but fulfilling friendships, mostly in an attempt to turn the downside of my day, saying goodbye to my visiting friend this morning, into a more positive mental reflection. That will have to wait for another uninspiring day. however. as my thoughts were unexpectedly derailed by a discussion on toddler dreams.

Seriously, have you ever wondered what it is that babies and toddlers dream about? Especially when they make those little adorable sounds in their sleep? Hawkeye is not a big talker in his sleep but he has on the odd occasion uttered a word or two without waking. These moments are definitely in the top ten of the most adorable and heart-warming things I experience as a parent. His strident crying in the middle of the night… much less so.

He has been a bit under the weather this weekend and not sleeping terribly well, which means we haven’t been sleeping terribly well. However he seemed to perk up by the end of the bank holiday Monday. He’s still has a bit of a persistent cough which sometimes wakes him so he’s been coming into our bed somewhat earlier than usual. Last night, sometime before us two adults fell asleep, Hawkeye muttered something incomprehensible while deep in slumber between the two of us. rolled over, and tucked himself closer to his father. The two of us exchanged looks and a quiet chuckle in the darkness before succumbing to sleep ourselves.

It was probably an hour later that I woke because Hawkeye had started to whimper. He didn’t wake up with a sharp cry like he has been lately. (He saved that for 3am. And for 4am.) But he was definitely distressed and I was about to start feeling around for his pacifier in the darkness when I was brought to a standstill by the sound of his voice.

I was seriously frozen for a moment trying to process the non sequitur. And then I had to bite my lip and try really hard not to burst out laughing. What do toddlers dream about? Apparently they have nightmares about losing their biscuits! His cries became more strident as he continued to wail about “My bickie! My BICKIE!!!!” prompting me to return to action. I found his pacifier and his giraffe blankie and made soothing noises until he rolled over, this time closer to me, and settled back down to sleep.

Now, I wasn’t really going to do more than post a funny sentence about this on Facebook. But then later this morning I was chatting with my husband when this episode came up. 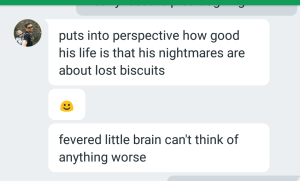 Reading this made me pause. Because I did remember that, at one point in the middle of last night’s waking while I was tipping between needing to fall asleep and wanting to burst out laughing, I had a small moment of panic about what would happen if he actually woke up. Sometimes he can be soothed back to sleep easily without every opening his eyes. Other times he will wake up fully when he’s unable to sink back into a new sleep cycle or if we don’t respond quickly enough, and he will spend a bit of time fidgeting next to me. I knew that if he woke up this time, the very first thing he would ask for would be a biscuit. And let’s be honest, there was no way I was getting out of bed at 2 am to get him a biscuit. I would have to tell him no, he couldn’t have one. And that would be, like, his ACTUAL nightmare coming to life.

I mean, how terrifying would that be for a toddler? I dreamed the other day that I was in the middle of a year-long course and I hadn’t done any reading or get to any classes. I’ve been out of college for over a decade now and I still woke up with a pervasive sense of anxiety. I’m pretty certain that if I had woken up to realise that the first thing on my day’s agenda was a meeting I had not prepared for, it would have actually sent me over the edge into maddened panic.

As it happened, he didn’t wake up. I didn’t have to bring his nightmare to life. But it kept me thinking about what my husband said – how good his life is that this is what he cries about in his sleep. You know what? I’m pretty damn pleased about that. It’s not that I think I can shelter him forever. Life doesn’t work like that. But it’s still satisfying to know that if he wakes up crying “my mommy!” or “my daddy!” one of us is there to answer him. And if he wakes up crying “my bickie!” well… one of us is still there for him with or without the bickie, but if that’s the worst of his problems then I think we’re doing fairly ok as parents.

On a broader level, I also found this to be another stark reminder about how small their worlds are. It’s not just that a lost biscuit is the worst thing he can dream about. It’s about realising that, in the context of his universe, and the fact that his brain is still physiologically unable to process emotions the way an adult can, the presence (or absence) of a biscuit becomes a matter of great import. Parents, as adults, often forget this and, in our exhaustion and fatigue and the resultant irritation, we trivialise these outbursts. I’m not saying I give my son a biscuit every time he cries for one, but I try and remind myself that his distress at hearing me say “no” isn’t about emotional manipulation or poor behaviour, but his immature attempts at dealing with disappointment and refusal: emotions for which he has not yet even learned names. This evening when coming home he threw one of those honest-to-god tantrums that involved flinging himself to the ground and crying because I didn’t let him stay outside in the parking lot to play with the cherry blossom petals. He was there beating his fists against the concrete in full view of all the apartment windows. I could have bodily picked him up and carried him the twenty steps home at that point and dealt with it inside. But why doesn’t he have a right to protest being arbitrarily forced to submit to my whim just because I don’t want to hang out outside this evening? He can’t argue with me logically. I can’t explain to him than “no, we have to go inside now because mommy is tired, her bag is heavy, and she just wants to get the evening routine going.” So I crouched down next to him and tried to distract him out of his crying while he pushed me away and refused to let me hold him. I hit upon the answer when I asked him if he hurt his knees when he threw himself on the ground. He paused and hiccuped that he did. I asked him if he wanted me to kiss his knees. He sniffled and agreed, and by the time I was done kissing both of his knees, right there in the parking lot between all the parked cars and any passing residents, he had calmed down enough to listen to me find other ways to cajole him inside. He then walked the last twenty steps home with me of his own choice, without tears or screaming, because I remembered to give weight to his refusal even though I really didn’t want to expend the effort.

I don’t always succeed, but I try. Watching him dream about bickies helps me remember why this is important to me.