I seem to be cursed with having extremely literary friends. I know several who have written books at this stage. Some are self-published, some are gaining steam in the traditional publishing world. Some are in the process of writing or shopping agents. I don’t mean this in a dismissive way of “oh everyone is writing a book these days.” I am genuinely quite in awe of these friends because having been wading in the shallow end of the writing pool this past year I know I definitely don’t have a novel inside me. I have, however, found great joy in reading my friends’ manuscripts for feedback and editing. Earlier this year I spent a while going through an autobiographical account which was interesting because it concerned a topic very far removed from my own experience. The juxtaposition of the familiar and the unknown made for a exciting reading, but it was also difficult going for me because I had to pay close attention to assimilate the experiences for which I have no first hand equivalence. The extra effort on my part, however, was well worth the privilege of being allowed to get so close to someone’s writing at such an early stage, where constructive criticism is usually most often needed, but is hardest to receive. Giving someone permission to read your draft writing is, in my opinion, an expression of great trust in your relationship with that person, because the creative writing process is so difficult and intimate that it is literally like handing a stranger the keys to your innermost sanctum. They may wander through it with awe and respect, or they may bulldoze through with cruel, destructive rejection.

In this manner, I have been privileged to be a beta reader for another friend who is writing up a storm in the YA fantasy world. Intisar Khanani is a classmate from school with whom I reconnected by accident over Facebook a number of years ago. A mutual acquaintance flagged that Intisar had self-published a fantasy YA novel, Thorn*, and since fantasy is a weakness of mine I had to go check it out. Even if it was terrible, I reasoned, I should still support a classmate. We may not have been friends back then, but I only had cordial memories of her and didn’t hesitate to buy the kindle version.

I needn’t have worried about it being terrible.

I was slightly put out to discover from the first sentence that Intisar preferred to write in the present tense, a habit I have rarely encountered in fiction. It never appealed to me and I prepared to have to grit my teeth through the choice of writing style, which normally distracts me from the story. Normally to me it’s like an itch that you can’t make go away. However by the middle of the second chapter I had honestly forgotten my objections. I stopped noticing the style and was completely engrossed in the story. Intisar was determined to achieve two things with her novels: to write mighty girls and build diverse worlds. I was stunned to finish Thorn and discover that it did not end in a traditional happily ever after. It ended with the promise of the beginning of a happily ever after, because once the girl rescues the prince, who’s to say that they will actually fall in love with each other? Relationships take work and Intisar’s characters are not spared the real world insecurities of a prince and a princess coming together at the end of a book.

After Intisar and I reconnected on Facebook, she asked me if I would be interested in beta reading her next novella, Sunbolt.

Beta reading is not the same thing as getting advance review copies, which is simply a method for authors to acquire reviews on the major book retail sites ahead of the publication date to assist with sales. Beta reading is an opportunity to influence the world building and plot weaving and character development. Unlike autobiographical writing, there is much more latitude to sink into a story because the author is trying to get you to see the novel through the eyes of its characters. Beta reading for Intisar gave me an amazing insight into the writing process of an extremely disciplined author. Sunbolt was not the first time I had given feedback on manuscripts to friends, but it was by far the most organised and professional experience I had encountered up that time or since. The draft was solidly complete (in fact, I believe I may have been reviewing a second draft at that stage) and it was accompanied by a questionnaire to assist the beta readers with formulating their thoughts. 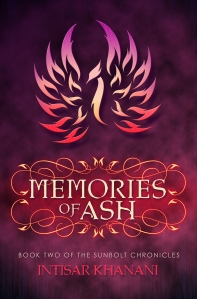 Sunbolt was always intended to be a series, and I was honoured to be asked by Intisar to read her first draft of the next story, Memories of Ash. This was where I truly got to see Intisar work. The story went through three rounds of revisions, growing to a full size novel. And being able to see the difference between the first and third drafts was breathtaking. I don’t know if I could ever have that kind of discipline to ruthlessly keep revising until the story works. I have read plenty of published works where it is clear by the end that the author suffered from revision fatigue. Books which tick along just fine until the last quarter where everything suddenly unravels as the author rushes to get the book across the finish line.

And the most amazing thing for me, as a beta reader, has been seeing my own feedback incorporated into the writing. I have often told Intisar, whenever she tries to yet again thank me for my assistance, that it is I who should be thanking her for letting me play in her sandbox. Aside from building a rich and vibrant universe, the Sunbolt Chronicles introduced some characters that I have truly fallen in love with. In particular, a supporting character to Hitomi, the heroine, proved to me my undoing. I fell madly in love with him very shortly after he was introduced in Sunbolt and I have pestered Intisar about him ever since. It has become a running joke between us, but the effect of her writing on me is so profound, that when yesterday I put down the draft of the third, as yet untitled novel in the series, I honestly felt bereft. Her stories leave me wanting more, and coming to the end of one means I have run out of chances to see these characters in action, leaving me with a sense of loss akin to grief. In a way, I suppose I have much for which to thank her characters, as they have brought us close together in online discussion, leading to yet another unexpected friendship which I now treasure greatly, despite us being thousands of miles apart.

I am still gathering my thoughts to formulate my feedback to the author, but at the same time I have gone back to reread the previous novel yet again because I cannot bear to part with my favourite characters just yet.

And when I finish re-reading Memories of Ash, I have The Fox Wife’s Tail, yet another friend’s debut novel, to look forward to on my Kindle. I’m desperately hoping that I won’t fall madly in love with yet another character because, honestly, there is only so much mourning I can handle at the end of each book. I might be forced back to my super secret stash of terrible romance novels which cheerfully go in one ear and out the other, so to speak, without causing the same sort of drama in the middle.

* Originally self-published, Thorn was recently acquired by HarperTeen and is due to be re-released in 2018.

** I was not requested to review Intisar’s writing here, and merely choosing to rave about one of my friends and favourite authors purely by my own choice.