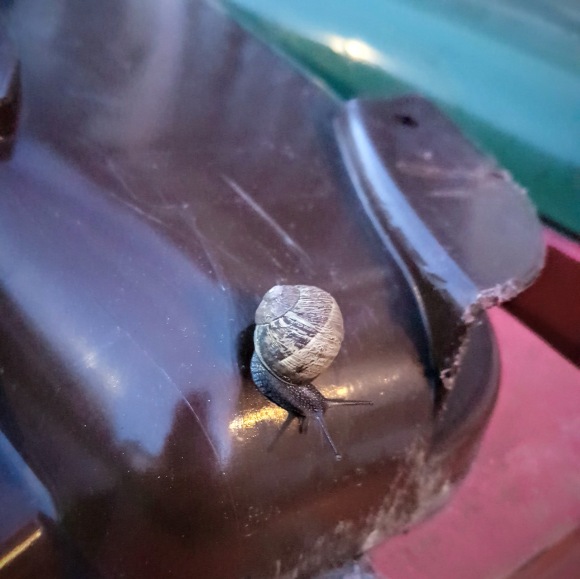 One of the benefits of moving out of an apartment complex and into our own house has been the ability to have a brown bin. Sure, there are downsides in that we now have to pay for our waste collection, but hey. We own our own house and our mortgage is still less than our previous monthly rent so I’m not complaining on that score.

Now, recycling in Ireland is a fraught affair these days. The island is small, and things like waste treatment attract an above-average number of NIMBYs so when you have little space to begin with, it’s a difficult problem. I do believe one Irish company, Panda, is on course to complete the first ever Irish recycling plant shortly. Ireland has two incinerators, both working at capacity. Licence for a third one has been granted but no construction has commenced due to local objections. The number of landfill sites has decreased significantly as the government has spent a number of years consolidating landfill operations from numerous poorly-managed facilities to a handful of highly-regulated ones.

Since our office held its inaugural “Green Month” last February I’ve been paying more attention to the issue of waste, just before the expression “single use plastics” became a household buzzword. And what I’ve discovered is that no one really knows for sure what’s recycled in Ireland. First of all, most people don’t realise that nothing is actually recycled here. Recycled waste is currently shipped to the UK to be sorted and processed at their facilities. From there Ireland has to compete for the shrinking recycled material market, which has shrunk significantly since China stopped accepting other countries’ waste. Furthermore, without the facility to sort recycling locally, there’s no clear understanding of what really get’s recycled even if you follow all the rules and put stuff in your recycling bin. After all, just because something is marked as “recyclable” doesn’t actually mean that the company that collects your waste and recycling actually has access to the facilities necessary to recycle that particular item.

Coffee cups are a great example. I didn’t know this last year, but apparently there isn’t a single coffee cup in Ireland that gets recycled, no matter what bin you put them in. Theoretically, it is possible to recycle a coffee cup, but this requires a specific process that separates the paper on the outside of the cup from the plastic lining on the inside of the cup. There are only two, yes TWO, facilities in all of the United Kingdom that are capable of doing this. Even there, only about 10% of coffee cups actually get recycled. The rest go to waste. This has of course seen the rise of reusable coffee cups and compostable / biodegradable coffee cups. Reusable take away cups are everywhere now. Bamboo, ceramic, glass, etc. But some people can’t be arsed to carry their own cup around and because companies still want to make money and not deny people their caffeinated lifeblood, compostable takeaway coffee cups have come into the picture. As part of the aforesaid “Green Month” our office switched from suing plastic and regular disposable coffee cups to compostable ones. This of course has meant a firm-wide roll out of brown bins in the office. Because a compostable coffee cup is only as good as the nearest brown bin. If it ends up in the regular bin it will either go to landfill or get incinerated. 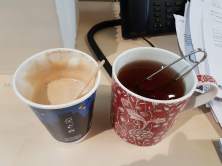 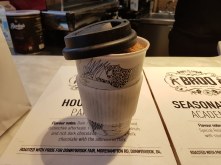 Insomnia, one of the large coffee shop chains here, has also come on board with compostable coffee cups. Problem there is that their lids aren’t compostable, but they’re still recyclable… as long as you remember to wash them. Don’t get me started on this tangent, I don’t have time to cover all aspects of how difficult recycling has become.  Back to the compostable coffee cups – despite introducing this, many businesses don’t actually have access to commercial composting services. And although there are rumblings of government plans in this area, currently there are no brown bins available on the street, meaning that compostable coffee cup will almost certainly end up in the ordinary rubbish bin. And all this before you start trying to wrap your head around the practical difference between something that’s “compostable” and “biodegradable”.  Oh joy.

Now, where was I? Oh yes, the brown bin. While recycling things like paper and plastic is becoming increasingly complex, requiring degrees in interpreting industry symbols, wading through the alphabet soup of PET, LDPE, PP, HDPE and PVC numbers, detecting difference in paper surfaces, and so forth (hint: that green dot  doesn’t meant what you think it means), the brown bin is relatively straightforward. You put in food and garden waste. It goes to a commercial composting facility in Ireland, and gets turned into fertilizer.

Therefore since moving to our new house, we’ve been able to stop putting our food waste, as well as things like egg cartons, tissues, paper towels, toilet rolls, etc.  in the regular bin. Similarly when I weed the garden (and oh boy are there a lot of weeds. Enough for a whole separate post.) I also put all that in our brown bin.

So where’s the catch?

Well, it’s called the brown bin. Because, you know, compost. The colour of the bin itself might vary depending on the company that issues it, but the lid will be brown as standard. But compostable bags and compostable bin liners for the home? Well… they’re green. You know, like the “green bin” which is used for dry recycling of paper and plastic etc. We now have three small bins under our kitchen sink. So what happens when you introduce a four year old into this environment? Something like this:

“Honey, can you please put these things in the bin please?”

“Well, the piece of paper should go into the recycling bin which is the grey bin with no bag….” (our recycling is meant to be dry and not have food remains so why bother with a bin liner?)

“And the foil from the chocolate bar should go into the grey bin with the white bag.” (we got a matching pair of simple grey bins, and the bin liners for this capacity are almost universally white here.)

“And the banana peel?”

“The banana peel should go into the small white bin in the middle, which is the brown bin with the green bag.”