After spending most of December on foot, for various reasons, returning back to work this past week let me get back on the bike for my commute to creche and work with Hawkeye. It is definitely a preferred method of travel for me compared to being stuck on the crowded bus in the mornings. And while the uphill trek home is more gruelling some evenings than others, I think all things being equal I would still pick it over taking the train.

I’ve had a lot of people say to me that I must be very brave to cycle around Dublin in traffic on a bike, especially with my kid on the back, but to be honest I’ve discovered it has much less to do with fear or bravery than it does with identifying anxiety and countering its causes.

I had been using a borrowed men’s bike at the time. The frame was simply a bit too tall for me. I had no trouble mounting and dismounting, but I struggled to get my feet down on the ground in a hurry because of the crossbar. A few years later, when I signed up to the Dublin Bikes scheme and began using their bikes to get around the city, it occurred to me that I was suddenly no longer afraid. It took me a bit of time to put two and two together, but eventually I realised that being unable to dismount instantly without a second thought is like a safety blanket to me in dangerous situations. Just the thought that I might be unable to reach the ground with my foot easily, or have it get tangled trying to get over the crossbar, or take too long dismounting by throwing my leg over the side in a crisis, sends my brain into a state of panic. When I was trying to decide if I could commit to cycling to and from work, I borrowed another friend’s bike to try the commute. It was a ladies’ bike, but a sports model with an angled crossbar. I acquitted myself well enough, but that didn’t stop me from having a very ungraceful dismount on the way back I managed to basically get stuck trying to swing my leg over the bar in a tight spot. I had been standing completely still, having arrived at my destination, and was in no danger, but I realised immediately at that point that if I wanted to cycle confidently around the city, I needed a bike where there was no impediment to an immediate dismount.

Now,  with a child seat on the rear of the bike, this becomes ever more important. I can’t very well give my kid a roundhouse kick to the face every time I’m trying to get off and on a bike by swinging my left over the rear! A ladies’ bike was therefore a necessity. Ultimately, I discovered that nothing but a full on city model with a very low crossbar would do for me. And furthermore I have to keep it free of impediment. The bike shop I used very cleverly found a mount for my U-lock on the seat post away from my legs. My bottle cage is attached to my handlebar stem. There’s absolutely nothing on my crossbar so that I can cross my leg over it instantly to get off and attend to whatever the problem might be. And when your child suddenly bursts into loud wails behind you while you’re cycling, that’s exactly what you end up doing. I pulled over so fast my feet were on the ground  before my brain even had a chance to catch up to the situation. So, even though my bike feels about as heavy as a tank, laden down with large mud guards, a basket and panniers,  a heavy duty rack to support a large child seat, and rattles at every bump on the road, I know it’s the right fit for me.

As for the wailing? It turned out that I went over a speed bump a bit too fast and all but two of the mini gingerbread men in Hawkeye’s snack packet jumped out and made a bid for freedom. The solution involved getting another snack in the shop, and later a bum bag sitting at my back allows him to reach for snacks one at a time while they stay safe.

The most recent upgrade I acquired to my bike was new pedals. The standard plastic ones that came with the bike were fine during the summer, but as the weather cooled and got wetter, I switched to winter boots and noticed that my feet kept slipping more often from the pedals, or sometimes I didn’t centre my foot correctly and the boot felt too big for the pedal, causing awkward mis-starts and foot placement adjustments just as I’m trying to gain momentum – a point at which I am most vulnerable to accidents.

I got lots of recommendations for clips and stirrups, all of which I ignored because it brought me back to that fundamental issue of anxiety – the addition of any extra movement or thought required for dismounting instantly made me feel less confident about being able to respond to any situation. And less confidence meant poorer response times and less rational thinking when on the road. And just less fun cycling. “Oh you’ll fall one or twice getting used to them but then you’ll be fine,” I heard when being told about wearing clips. Um, thanks but no thanks. I can’t afford that kind of a learning curve with a four year old on the rear of my bike.

So I went back to the same bike shop and asked them for advice. Their answer was studded mountain bike pedals. Now, I’ve seen some veritable monsters online. One model was even called “The Bear Trap” and frankly it looked like one. I didn’t want something that would be slicing my shins open any time I bumped up against them. A higher end model had options to open the pedals in half and flip them over so the studs were either tall, or short, and I found that the short ones were just enough to grip the soles of my boots without being their own form of hazard. Since then, finally having to cycle through Irish wet weather, I have concluded that they’re amazing. In fact, they’ll probably outlast my bike.

So there you go, I have bull bars for cruising, a basket for my hand bag, a quick access water bottle in front of me, a net on the back of Hawkeye’s seat for our rain gear, a bell to shoo thoughtless pedestrians out of my way, and a nicely padded seat to keep me comfortable. It’s a commuter bike in every sense of the word. It’s worlds away from the sleek racer I had in my twenties but it suits me for right now. 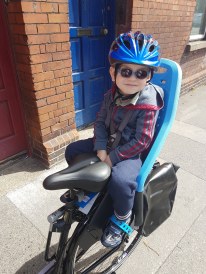