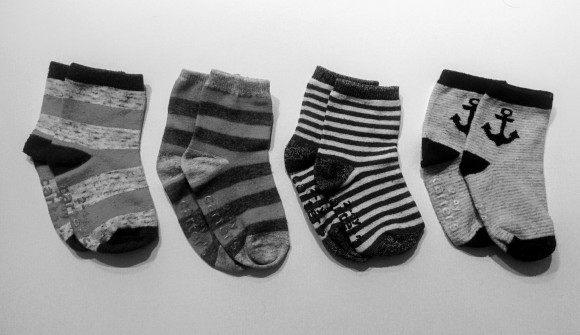 Last summer Hawkeye spent most of his time at home barefoot. He was one and a half and had a single-minded determination to explore everything around him. That was just before the “terrible twos” really hit full force.

This summer Hawkeye is two and a half. He’s a fully grown toddler with strong opinions on everything, full of contrariness, and doggedly determined to be independent, except when it doesn’t suit him.

This summer, it’s all about the socks. We can’t take them off him. He will consent to us taking off his socks to change him or bathe him, but no further. The concept of walking barefoot, or sitting on the couch barefoot, or sleeping barefoot in the hottest days of the summer, is deeply upsetting to him. We’ve sometimes distracted him at bed time enough that he doesn’t notice that we never put socks back on his feet, but this blissful ignorance on his part never lasted longer than a few minutes. He would crawl into his bed and immediately notice something amiss.

Honestly, if I had any insight into what goes through his twisted little toddler brain, I’d be able to write a book about it and retire rich. Instead, we indulge his whims so long as they do not interfere with safety or our hard boundaries, so he sleeps in socks, plays around the house in socks, and I haven’t even bothered getting sandals this summer.

This morning was a shining example of the depths of absurdity you go to as a parent as a result of his kind of indulgence. We have a little ritual that involves putting moisturiser on his knees which he likes very much, but I did things a little out of order this morning, so he was already wearing socks when he stretched out his legs and rested his feet on my chest.

I dabbed the lotion on his knees and was rubbing it in when he started tugging at his socks. Did he want me to put lotion on his feet? I’ve done it before but it’s not a regular feature for us. Did he want me to kiss his feet? I generally only do that when he’s not wearing his socks. His babbling wasn’t making any sense to me. All I could really catch was that he was talking about his toes and the pitch of his voice was unerringly swinging from conversational through whining and approaching upset territory. So I pulled his socks back off to see what was going on.

There was instant smiling and relaxation. “Bye bye, toes!” he called out, still resting his feet on my chest. I got ready to put his socks back on but he wasn’t finished.

I was compelled to join him in bidding goodbye to the little piggies. “Bye bye, toes!” I echoed, giving the top of each sweet, little foot a kiss.  “Now, shall we put your socks back on?” I asked him.

“Bye bye, toes!” he cried again, this time holding one foot with his hand close to his face and using the other hand to actually wave goodbye to his toes. “Bye bye!” When he stopped waving he poked at his toes some more, telling them something in a quiet conversational tone that I couldn’t quite decipher, but finishing once again with the same “bye bye!”

Only then was I was finally allowed to put on his socks.

We say hello and bye bye to a lot of things when we’re out and about with our toddler – dogs, cats, trains, cars, bicycles, nee-nahs (cars with sirens), and all sorts of other objects. But his conversations with his toes are absolutely the best ones.