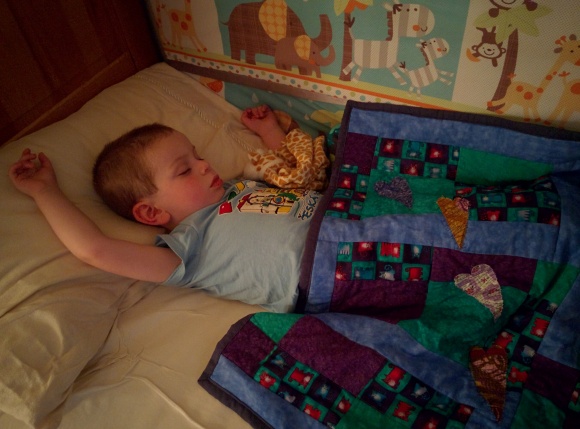 I heard the warnings early on, when Hawkeye was just an infant. If you find that he becomes attached to something particular…. make sure you have a spare, or three. Nothing quite like the end-of-the-world crisis because you lost your child’s favourite irreplaceable comfort item. 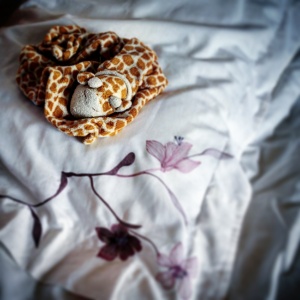 I decided to be proactive about this problem. From very early on, before Hawkeye even showed any interest in one item over another, I picked out a giraffe blankie comforter toy, acquired three more identical ones, and proceeded to make sure the giraffe was present in all aspects of Hawkeye’s life. Especially bed time. It took a while, but eventually the connection was achieved. It is required for sleep, and it is a soothing presence in unfamiliar situations. And best of all, I have three replacements. One lives in his bed, one lives in our bed, one lives in creche, and one in a drawer for laundry rotation. Problem solved. Or so I thought.

Hawkeye still sleeps with the giraffe blankie. For a long time, that was the only thing he would agree to sleep with. An actual blanket was a no-no. By the time he was one and firmly ensconced in our bed, he displayed a strong dislike of being covered by anything. Perhaps it is a form of rebellion for being swaddled for months on end. In my defense, he had a habit of smacking himself in the face constantly in the middle of the night and waking himself up with a shock. Not conducive to parental sanity. Anyway, for whatever reason, Hawkeye developed an intense dislike of blankets. Even if asleep, he would kick off any covering fairly quickly or, even worse, he would wake up and loudly make his displeasure known.

When he got to be big enough to sleep in his cot bed with one side taken down completely, I started lying down with him in his bed for bed-time. Unfortunately, while the men in my family seem blessed with hot blood, I get cold easily, especially if I’m not moving for a while, so I would bring my own fleece blanket into Hawkeye’s bed. Early on this required some negotiation. He was against the blanket, but I was against freezing. We compromised by making sure the fleece blanket only covered me, and did not encroach on his own person. This became known as “mama’s blanket”.

This was fine with me. For cold weather we got him fleece pajamas and thick socks. For summer weather we had shorts and a t-shirt (and still socks, of course, as per yesterday’s post).

Then ten days ago, out of the blue, he asked for a blanket. I looked around in surprise, but spotted one of his lighter baby blankets nearby and snagged it. He played around with the edges of it and eventually fell asleep holding it. Unfortunately, for all that it’s a super soft, light blanket, it’s also somewhat stretchy and fairly large for baby blanket, so he woke up in the middle of the night with his legs tangled and this displeased him greatly.

The next night my husband pointed out that this was not an ideal blanket if we wanted to encourage his newly-found skill of sleeping through the night in his own bed. I rooted around Hawkeye’s linen drawer, setting aside the various knitted blankets which have a tendency to get stuck on fingers and toes and create the same sort of limb tangle, and came up with a small, handmade baby quilt. It was a gift from the mother of a friend on Hawkeye’s birth. However, I didn’t dare use it when he was little, sticking to the recommended waffle-blankets and knitted things that are breathable in case his face got covered up. When he was a little bit bigger it was summer and too warm, and when he was bigger still and the weather turned colder, he was old enough that the quilt would have been safe to use, but he had already begun his blanket boycott at the time. Consequently the beautiful gift sat in his drawer until now. It’s just about big enough to cover his feet and torso, and it’s sufficiently quilted to not really bunch up and wind around his legs the way thin blankets do. It seemed perfect.

There’s only one problem. It’s definitely irreplaceable. On the second night of him sleeping with the blanket he woke up in the middle of the night, which meant he came into our bed. And just as I was settling back under our own duvet to fall asleep again he rolls over and moans in my ear: “myyyyyy blaaaaanket!”

He didn’t settle down so of course this meant mommy has to get up, go back to his room, and get the quilt. The next day, I pulled out another blanket that would, I thought, equally suit our purpose and left it in our own bed. I figured – this will keep me from having to get up twice and also help him to not get too attached to any one single blanket. Right?

He slept through in his own bed for the next couple of nights, and I didn’t think to move the replacement blanket to his own bed. The weekend rolled around and Saturday we’re settling down to nap in our bed, when he asks for his blanket. Naturally I pull out the replacement blanket that has been loitering in our bed the last few days and cover him.

He kicks it off.

It’s not his blanket.

I had to go get the quilt from his own bed or face the wrath of a cranky toddler who skipped his nap time (he’s not quite ready to drop that last nap yet, we tried). 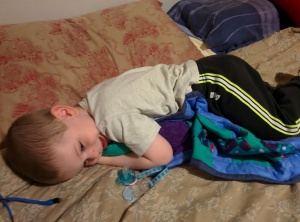 So despite all my hard work, he seems to have gotten attached to an irreplaceable object for bed time. A few times, he’s almost fallen asleep in his bed only to discover it missing and wake up demanding its presence. At some point when the autumn rolls in, I’m thinking we might have to take him shopping for a proper child sized duvet and hope that the excitement of picking out his own duvet will induce him to sleep with a blanket that isn’t likely to become a family heirloom. While I have no fear of washing it now and then if necessary, and continuing to have it in circulation, if nothing else the quilt is soon going to become too small to use as a blanket in his bed and he will need a proper duvet.

Until then, irreplaceable handmade quilt blanket it is.

Photograph of the giraffe from my original #100happydays challenge