Do you ever sit there, ready to tear your hair out, rant and kick and scream about the circumstances in which you find yourself, seeing every error you have made that led you to where you are right that second?

Yeah that’s what it’s like arguing with a four year old. Once you start down a particular road, it’s very hard to reverse course. Or maybe it’s not that hard, but stupid adult pride and principle gets in the way. A child could very easily forget what happened five minutes previously, while you sit there and stew in defeat, having tried to teach him something.

The setting for our battle of wills was Lego. “Little” Lego, as he calls it to distinguish it from Duplo. We were assembling bags 3 and 4 of Aunt Strawberry’s epic gift of a Lego Fire Station. Bags 1 and 2 already yielded a Fire Marshal’s car, a helicopter and helipad, and a perpetually on-fire food cart. Bags 3 and 4 comprised the totality of a 6-wheeled fire engine ladder. We already had some skirmishes over locating specific pieces and following verbal directions such as “top” and “bottom” of objects. However we overcame these.

Where we got stuck was numbers. Now, Hawkeye’s really good at counting. And he’s also good at recognising numbers. I know for a fact that he’s brilliant at seeing a Lego shape depicted in the instructions and quickly identifying it on a tray and then placing it correctly as per the illustration.

Sometimes though, he just decides to stop giving the right answers. Since he’s four, it’s hard to know if it’s because he’s bored, frustrated, confused, unsure, silly, goofy, or honestly doesn’t know the answer, or a combination of all of the above. See, I made the mistake of asking him what the number on the roof of the fire engine was. The zero he identified immediately, but the number nine…. that was another story. He called it a one, a six, a ten, anything other than a nine. Eventually I got a card and wrote out all the numbers from one to ten and we counted each one.

Now, at this point, I knew I was so far off the parenting reservation I may as well have jumped on a space rocket. I should have turned back at the first wrong answer. I should have just corrected him and moved on. That would have been the right thing to do. The moment I continued to persist in trying to get the right answer I was lost. But hey, I never claimed to be a perfect parent. The worst moment, however, is watching the situation deteriorate while you can see, with perfect clarity, that every step you take is the wrong one and yet you find yourself unable to stop.

“Ten? Really? But, does this look like the number ten here?” I pointed to the handwritten number ten.

“But…. you just told me it looks nothing like the number ten here. So why are you saying ten again?”

I think I was fairly close to strangling myself to avoid the risk of strangling my own child.  I knew I was saying all the wrong things but it was like watching a train wreck in slow motion. It was at this point that my wonderful husband intervened, no doubt called in to save the day by the increasing edge of hysteria in my voice and Hawkeye’s upset one. Because I was at the point where my conscience was yelling at me to back down but my blind intemperate perfectionism and stubbornness obliterated all rational thought. I could not figure out if Hawkeye was intentionally trying to play games or if he was truly at this point lost. I declared that perhaps he was too tired and we should finish the Lego assembly tomorrow, and this was definitely the last straw for Hawkeye and it was at this point that The Mister sailed through the kitchen doorway like a knight in shining armour.

Having established that I was being driven demented by the number ten, The Mister sat down next to us and looked at Hawkeye with a completely serious expression. At this point Hawkeye was sitting on my lap as I was blindly trying to feel my way out of the parenting disaster of my own creation by trying to comfort him without losing my imagined high ground.

With Hawkeye on my lap, The Mister was at eye level with him and he leaned forward. His gesture only increased the gravity of his serious facial expression.

“Now listen. Something doesn’t become true simply because you keep repeating it. It’s that kind of thinking that might lead you to grow up voting Republican.”

There was this crystal clear moment of silence in which I could hear a pin drop. Hawkeye sniffled a little. And then I absolutely dissolved into giggles. Which was entirely The Mister’s point. With his typical deadpan delivery, he aimed to pull me back from the edge of insanity and he succeeded admirably without even looking at me.

The joke flew right over Hawkeye’s head, and hit the target which was me. The Mister smoothed things over, found a way to get to the magic number nine, we each had a gingerbread cookie, and moved on to the next part of the fire truck as if the disaster had never happened. The whole incident has now been chucked into the giant bin of all other parenting disasters I have accumulated over the last four years. The takeaways from the lesson were clear: insisting on getting the correct answer is wrong. Gingerbread cookies fix a lot of problems. My husband can teach a master class on the deadpan delivery.

I’m not particularly proud of my parenting skills today, but at the end of the evening he still wanted mommy to do bedtime. So tonight I am grateful that four year olds aren’t known for holding a grudge and that I appear to have been forgiven for my terrible lack of judgment. Tomorrow is another day.

And we have yet to build the actual fire station itself.

*Even before The Mister requested a footnote, I had always planned to clarify that he doesn’t actually hate Republicans. His sole purpose was to make me laugh and de-escalate the situation like any professional negotiator. As an Irishman, the word has a completely different meaning, of course, but he has been married to an American for many years now and the last two years has definitely seen and heard his fair share of political rants as a captive audience to understand how to wield the American counterpart label as a tool for his purposes. Sadly, the present embrace of the use of “alternative facts” by people in great positions of power who are not four year olds and who should know better, simply makes them easy targets for jokes. 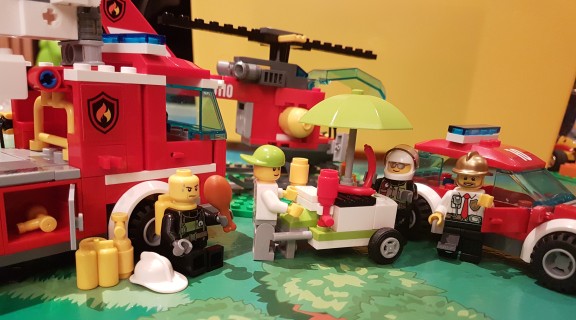