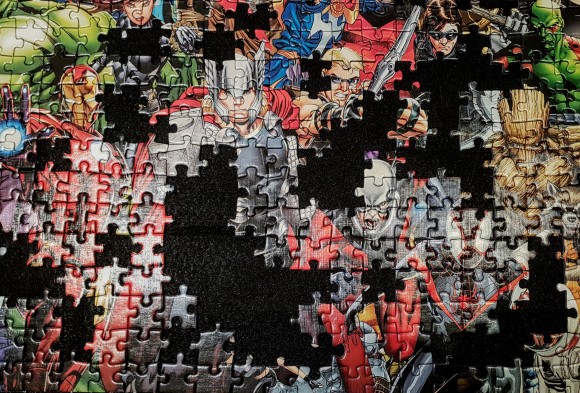 Christmas day began pretty much like any other day in this household. We gradually acquired wakefulness thanks to a restless starfished child between me and The Mister, first rolling in one direction, then another, before rolling back toward me and in a whiny whisper declaring that he’s thirsty. Or hungry. It’s usually one or the other. With no alarms to dread, my default response is to will myself to back to sleep as fast as possible in the hope that the request was just a bad dream until the poking and prodding and increasingly loud whispers become impossible to ignore. I know I managed to snooze at least through some of it this morning because when I did finally pry my eyes open The Mister informed me that he just heard the cat horking up a hairball downstairs.

Somewhere in the middle of this everyone remembered that it’s Christmas, and we reminded Hawkeye about Santa’s milk and cookies and Rudolph’s carrots and eventually we trooped downstairs. Hawkeye quickly zeroed in on the evidence of Santa’s visit, pointed out that the reindeer didn’t finish the carrots (but seriously, who eats the ends of carrots anyway?) and discovered Santa’s toys almost immediately. We were off to a good start. 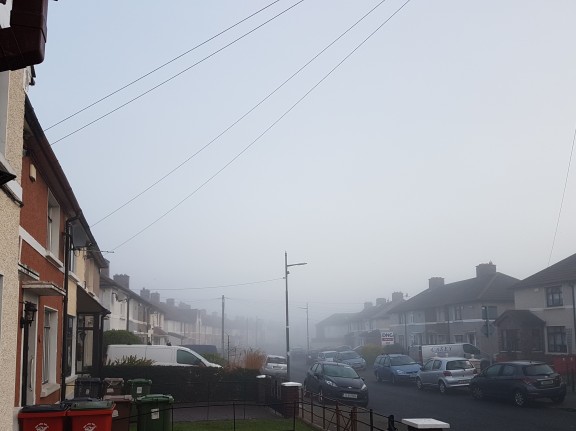 Outside, dense fog was very slowly lifting from the ground even after the sun came up. The end of our street was lost in the mist, with just the sound of zooming scrambler bikes echoing from the surrounding streets as older kids got their jollies off by speeding around the neighbourhood. Inside, The Mister and I turned our attention toward getting read to open the gifts.

In a remarkable show of restraint, Hawkeye actually obeyed us when we requested that he first tidy up his toys from the previous night before we sat down to the unwrapping frenzy. The Mister managed to snag a coffee and toast during this time, while I cursed a blue streak at the cat’s “present” and informed Mr. Darcy that he was on the naughty list. We were short of coal, however, so I retaliated by wrapping up his breakfast kibble in wrapping paper and making him work for it. The cat, bless him, is dumb as a fence post, and eventually I had to help him along by tearing a small hole in the paper, at which point he proceeded to try and lick the parcel open, pushing it across the floor with his nose because he hasn’t figured out that a paw would help him get better leverage. Merry effing Christmas, cat. Next time, try to not vomit on The Mister’s backpack, ok?

Then the human fun began. For having such a small, intimate Christmas of three, the amount of gifts under the tree was fairly enormous. This was of course helped along by the fact that some family sent or organised gifts for Hawkeye from abroad and friends with whom we had exchanged gifts beforehand. J sent me chocolates from Vienna which she sadistically wrapped individually inside her package and I decided to add to the pile under the tree. She never fails to indulge my love for all forms of Manner chocolate and Rum Kokos, and several samples even made it onto the Christmas tree, with the alcoholic ones near the top to avoid small curious fingers. A few even made it straight into my mouth when Hawkeye wasn’t looking.

He was far too busy anyway tearing into his presents. Despite my annual intentions not to overwhelm him with gifts, we always end up with a good number of them. Partially its our own desire to spoil him and partially it’s the inevitability of friends and family contributing to the present stack. This is the first year we even let him open all of his presents in one go, and even the, a few have remained unassembled to allow him time to enjoy playing with each new acquisition. The morning was a non-stop torrent of chatter about Paw Patrol and PJ Masks, transfomer Dinosaurs, “little” Lego (ie not Duplo), Bumblebee, and an ever increasing pile of chocolate. One of our luckier escapes was not having any AA batteries in the house, which has given us at least a day’s reprieve from discovering just how much noise the transforming dinosaur makes. Hawkeye made more than enough noise to compensate, sitting on the floor at one point singing “Bumblebee! Bumblebee! Bumble! Bumble! Bumblebee!”

But I know that all of this is kind of extraneous, as Hawkeye so ably demonstrated while unwrapping one of he earliest gifts. One of his godparents, Mr. Kinch, has continued an annual tradition of expanding our holiday decorations with old school metal cast ornaments. This year, a snowman has joined our collection of angels, Santa, and Christmas stockings. However, before The snowman emerged from his protective packaging, Hawkeye pulled off the decorative wrapping paper, looked at the small white bundle in The Mister’s hand, and reverently whispered…

There was a short pause before The Mister redirected his attention to what was in the tissue, and once fully unwrapped Hawkeye wasted no time in adding the snowman to our tree. I texted a thank you to Mr. Kinch. “If I’d known he liked tissues,” Mr. Kinch replied, “I’d have gotten him a second one.” 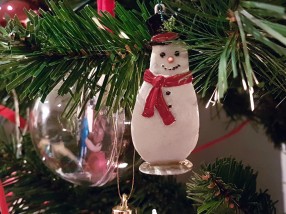 And that was pretty much the most productive part of the day. I mustered up enough energy to throw on some laundry, but the rest of the day was spent playing with Hawkeye and I finished the evening with indulging guilt-free in one of my own gifts, a 1000 piece jigsaw puzzle, which I find to be a completely addictive and mesmerising hobby. Pre parenthood I might have stayed up late into the night to finish it but alas we are now burdened with an adorable alarm clock that just can’t be snoozed and I know that sooner rather than later I’ll be hearing “mommy, I’m thirsty” all over again.

Merry Christmas to all, and to all a good night.