That’s a pun. But you wouldn’t know that unless you knew that we spent yesterday visiting the Aillwee Cave and Birds of Prey Centre.

The whole experience is very well organised. While Doolin Cave has a small visitor’s centre, everything at Aillwee Cave is done on a large scale. It’s one of the oldest caves in Ireland, and the oldest show cave. The operation expanded to include the Birds of Prey educational centre as well a farm shop specialising in onsite production of Burren Gold Cheese. The entrance to the cave (as well as the main gift shop and the tea rooms is located at the top of a Burren-terraced mountain. It’s a shorter tour, only 30 minutes, and overall a slightly easier experience on small feet than Doolin Cave.

On the other hand, the wonders of Aillwee cave are much more subtle compared to the Great Stalactite of Doolin. Where Doolin is rougher and steeper and muddier and brighter, ending up at the cavern with the magnificent calcite chandelier, Aillwee is almost like a gentlemen’s club. The lights are dimmer, the walk is mostly level, the stalactites are fewer, smaller, and younger. But on the other hand, while the owners at Doolin Cave had to excavate massive shaft straight down to accommodate stairs, and then widen the passageways and finally excavate the front of the cavern holding the Great Stalactite to put in steps down to the base of the cavern, Aillwee only needed to have the floor leveled out and filled in a few places, and some bridges inserted over chasms and past waterfalls.

The Aillwee cave tour follows a natural circular tube cut through the mountain by fast flowing water. The natural roof of the passageways speaks to the powerful force of water over time – literally moving mountains. The cave passage meanders through the mountain past various features on display to tourists such as the skeletal remains of a bear and evidence of earlier bear hibernation before the species disappeared from the island, limestone formation known as the Frozen Waterfall, numerous displays of stalactite straws, relatively young stalactites and stalagmites (about 11,000 years old, compared to the 30,000+ stalactite in Doolin), and a great chasm known as the Highway with an actual waterfall. The tour ends at the Highway (about a third of the length of the cave) as the next portion involves a six foot drop followed by very narrow crevasses and at least two, narrow, underwater passages, the longer one being 80 feet. Only four people have ever traversed the full length of the cave, and their collective opinion is that it’s a once-in-a-lifetime opportunity. Once-in-a-lifetime, because nobody who’s done it ever wants to repeat the experience a second time. 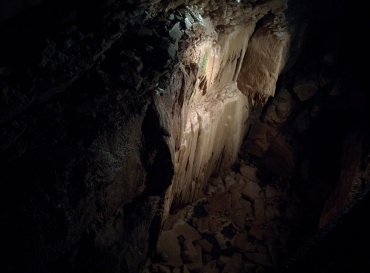 The Frozen Waterfall, a result of limescale-rich water constantly sliding down the wall of the cave, does turn into a waterfall depending on the level of rain. Torrential rain outside the cave can result in water flowing fast enough to spray to the level of the metal bridge constructed over the chasm below, which was the original entrance to the cave discovered by a farmer in the 1940s. The lights in the cave are very dim and do not stay on after the tours pass, because they generate too much heat and cause green algae to grow on the walls. Doolin Cave, in contrast, is relatively brightly lit as they have a newer system of LED lights that generate less heat – something Aillwee Cave hopes to install in the near future.

Just before the last turn of the Highway which ends in a tumble of giant boulders blocking the way down to that 6-foot drop, there is an actual waterfall, filling the air with fine spray. 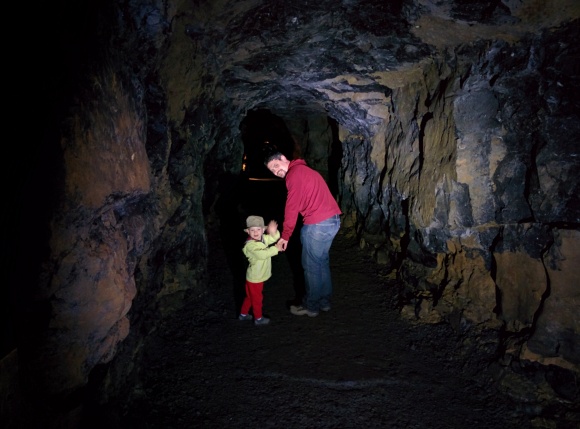 The return journey is done through a 250m man-made tunnel – the only portion of the cave tour that was fully excavated in 1992 to allow a circular trip, and also to allow a fast exit from the tunnel in case of floods.

Back down toward the bottom of the mountain is the Birds of Prey Centre. We were slightly late to the first show where the handlers displayed a bateleur eagle, a barn owl, and a lanner falcon, contrasting their different flight styles, hunting habits, and eye sight. Jess the barn owl is an imprint, born and raised in captivity. Barn owls have very poor eye sight, using their concave, (utterly un-aerodynamic) faces to catch sounds when hunting. Unlike the eagle and the falcon, which spotted tiny bits of chicken on the gravel the instant they were allowed to see them, Jess needed her handler to make sound to guide him to the morsels of food. We were told that, until the last couple of years (Jess being 9 years old now) he would sometimes fly into the speakers which were broadcasting his handler’s voice. 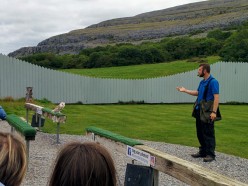 Afterward we tasted some of the local cheese (a type of gouda with different flavours) and then wandered around the bird enclosures. It was amazing to see some of the birds so close. The conservators’ geeky sense of humour, as well as a clear obsession with Game of Thrones, was clearly on display in the name plates on the cages. 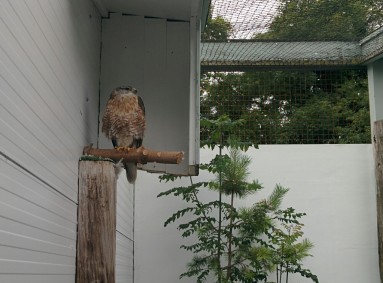 The vultures were appropriately named Henry and Dyson. The owls sometimes followed your movement with their unblinking stare. One of the harris hawks was clearly restless, flying from perch to perch constantly (though capturing him doing it was another matter). The steppe eagle, Vladimir, paced back and forth on his perch with his massive feet, occasionally taking to the air.  And the white tailed eagle was simply magnificent to behold. 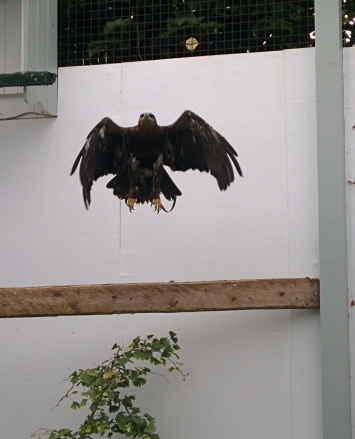 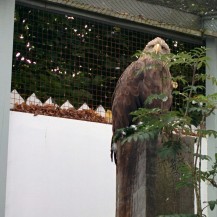 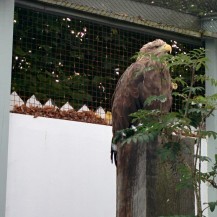 And the snowy owls… I’ll leave it to the Game of Thrones fans to check them out!