Yesterday we decided it was time to venture out beyond the village for some wee adventure. We didn’t have to go far – literally ten minute drive down the road – to find a spectacular experience: the Doolin Cave, or as Hawkeye called it “the big BIG tunnel!”

I was a little nervous about how Hawkeye would handle the experience but the staff didn’t seem terribly concerned and merely warned us of the expected hazards: lots of steps, slippery surfaces, etc.

There were lots of steps. One hundred and twenty five, to be precise. Thankfully I didn’t realise that when we started downward because I misheard the lady at the ticket counter and had wondered about why she was making a big deal of pointing out 25 steps to us.

The Mister, in a heroic feat, took full charge of the toddler, carrying him down the whole way so that we could keep up with our tour group and then carrying him up and down many of the trickier sections of the cave tunnels despite the slippery surfaces and low head clearance. The tour organisers very thoughtfully supply hard hats, which are absolutely necessary for anyone over four feet in height.

I don’t know how he managed to do it and make it look easy at the same time. I was not wearing the best shoes and have become somewhat nervous over my footing since my last big ankle injury so I was very careful, but I spent the whole time feeling rather wound up tight and anxious expecting some kind of disaster. At the very least, some low level tantrum. However despite the whole tour lasting 50 minutes, Hawkeye was remarkably well behaved. There was minimal fussing and only a little bit of whining toward the end when fatigue and hunger had started to erode his paltry reserves of patience. We made it all the way through and back up (this time with Hawkeye even climbing 80 of those 125 steps on his own) with no tears or accidents. 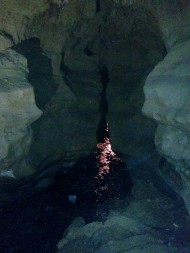 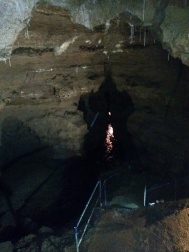 In addition to the parental anxiety I was also quite distracted by the tour and the views and my desire to photograph everything. I only had my old Nexus phone with its outdated camera, so some of the photos certainly suffered due to the low light conditions, but the sights were just too breathtaking and spectacular not to try and capture in images, even if those photos can only convey a fraction of the magnificence.

There are lots of facts I could spout off about the Great Stalactite of Doolin, but you can read up on that yourself. They can build a certain picture but they can’t convey the awe and wonder of looking at something like that knowing it was made by nature. The cave owners courted significant amount of controversy and criticism in developing the cave for tourism, but I for one am glad to have had the privilege of such an experience. To go through a twisty narrow tunnel (carefully) blasted by man only to arrive at a vast natural cavern with a nearly flat roof carved millions of years ago by ice and water, with a 25 foot 10 tonne stalactite chandelier suspended from the centre since time immemorial is an event that is hard to describe. Beautiful. Breathtaking. Awe-inspiring. All such adjectives are rather trite and overused for such marvels. That is why I prefer photography when possible. 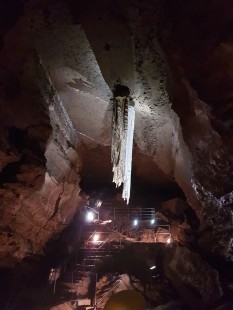 One can never forget thought that this hidden wonder is located in a remote corner of Ireland. Because you venture out of the damp darkness into bright sky and a short nature walk around small, lush paddocks of herbs and farm animals and, if your timing is right, a baby goat on the roof of the visitors’ centre. Because only in Ireland. 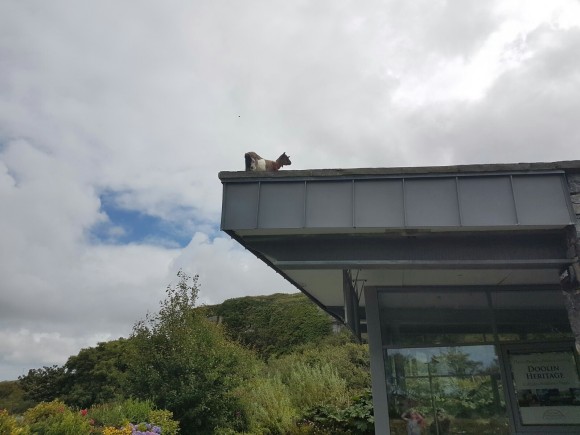