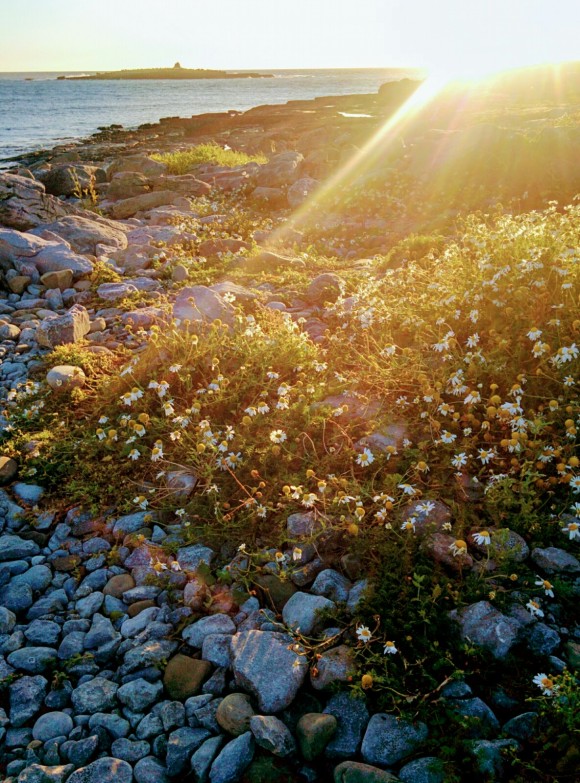 It’s amazing the difference that sunshine can make to a place. Monday was a bit of a mixed bag but yesterday was gloriously sunny, despite a few patches of rain. Instead of windswept desolation there was an endless expanse of deep blue sky and verdant green farmland. Instead of a dark echo of the past, the crisscrossing old stone walls and dotted ruins brought quaint sense of whimsy to the landscape. 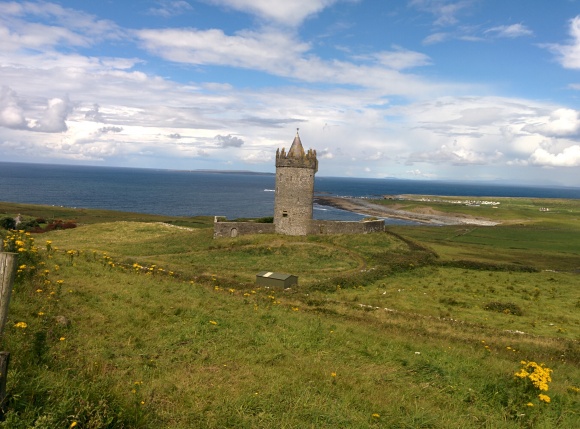 We aimed for a less challenging adventure this time, settling on Moher Open Farm. The challenge, however, turned out to be not the farm itself but the short drive there.

We have not yet established conclusively whether Hawkeye suffers from motion sickness or not. He’s been in the car often, and we’ve only had one bad experience. When he started getting upset about ten minutes into the fifteen minute drive, my first thought was that it was a toileting issue. We’ve been doing really well in that department but it’s still relatively early we always come prepared for accidents. After a couple of minutes though I started to suspect that he might be feeling unwell. We rolled down the car windows to no avail. I decided at that moment that we just need to stop and get the toddler out of the car, but this is easier said than done if you’re on windy narrow rural roads where cars have to slow down and pull into people’s driveways to let an oncoming vehicle pass in the opposite direction. The farm entrance was just ahead and The Mister decided to get us inside. He was about to pull into a parking spot when I told him to stop wherever he was and let us out. This turned out to be a stroke of good thinking, because when Hawkeye let loose with the projectile vomit I had already pulled him out of his seat before my husband even pulled the car to a stop and his face was therefore aimed at the (sadly still closed) door.

But hey, this place was 1) a farm and 2) catered to kids so no one really blinked an eyelid at the fact that my husband dashed into the reception area to grab paper towels or that I was in the backseat of a car that was sticking half way out of a parking spot with a crying child next to me partially covered in vomit. 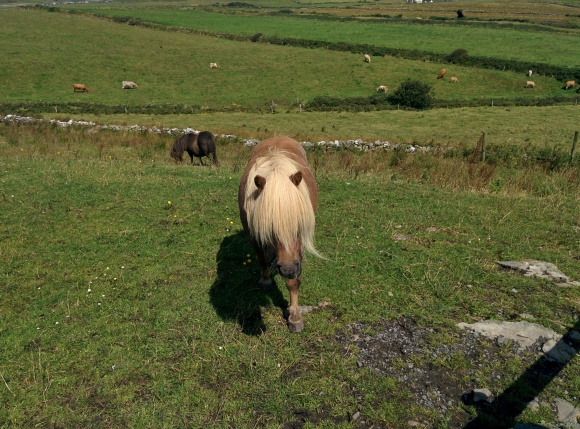 We got the wee beastie cleaned up, did as much cleaning up as we could with baby wipes, pulled the car in, and then I settled the boys at the table in the coffee shop while an older gentleman from the farm equipped me with a bucket and some water and I set to cleaning up the car properly, soaking everything thoroughly in water and scrubbing everything with a rag. By time I finished fifteen minutes later the car was clean and Hawkeye was chattering away impatiently, wanting to see the animals, like the whole episode never happened. I did spend a few more minutes futilely trying to dry the big wet spot on the side of my trousers under the hand-dryer in the loo before we continued on with our day. Which makes this a parenting milestone as before we would have given up, turned around and called quits on our day.

The Moher Farm has a lot of activities for kids of all ages, both indoor and outdoor, but given the good weather we stuck to wandering around all the animal paddocks and fields, feeding the sheep, alpacas, llamas, goats, donkeys, and avoiding the predatory beaks of the emus and the ostrich. We also ended up avoiding the ponies who, for all their small shaggy cuteness, turned out to be cantankerous creatures in a biting mood.

Hawkeye very patiently listened to daddy explaining how to hold his hand flat and keep his fingers together, and greeted and waved goodbye each animal exuberantly. 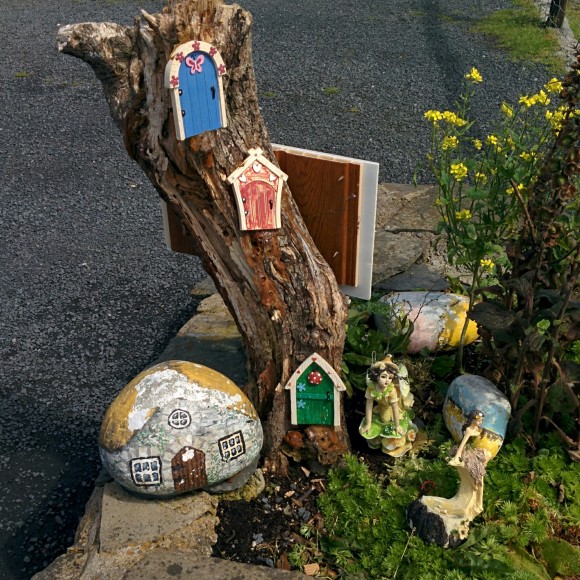 Hawkeye’s Guard Bear once more showed his dedication to his duty by fending off a sneak ostrich attack from the rear on an unsuspecting mommy. 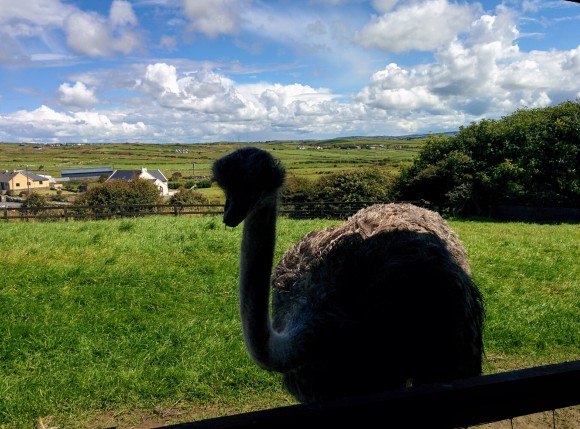 “Listen carefully,” daddy said to Hawkeye while mommy made sure Guard Bear was uninjured. “This is why you can’t trust birds. They’re all mental. Completely bonkers.”

We finished off the tour with bunnies and various species of exotic hens.

When it came time to go home I spent the entire fifteen minute drive holding a plastic bag at the ready and making up the most ridiculous songs I could think of to keep Hawkeye engaged.

In the evening, family members gave us a reprieve from parenting. There were a few tears but eventually Hawkeye condescended to bedtime with his aunt while The Mister and I snuck out for an early meal and then we explored more of Doolin in the bright evening sunshine that Ireland’s northern latitude bestows on the country during the summer months. 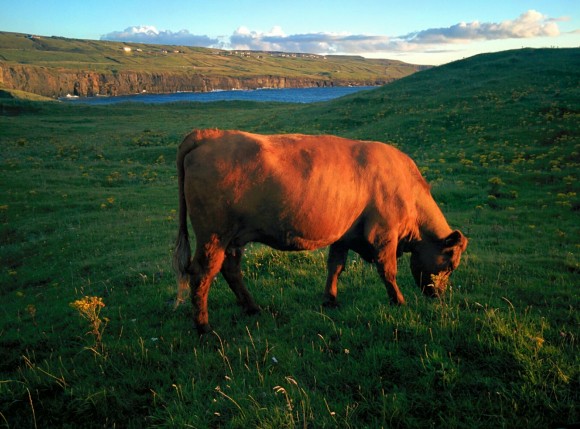 It turns out that the bit of Doolin village we’ve seen so far is one of three clusters of activity. There’s also Fisherstreet, and Doolin Pier. But each of these locations is about a kilometre apart, and there is still no shop to be found. You can buy tourist knick knacks, Aran sweaters, knitted scarves, chocolate, postcards, etc but you can’t buy bread or milk without driving down to Lehinch or Ennistymon. 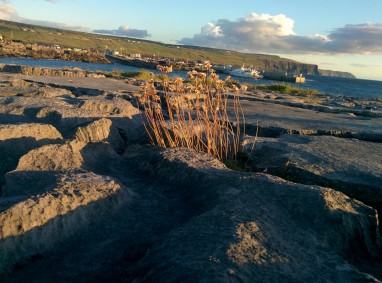 We ended up walking all the way down to Doolin Pier, the landscape lit up for us by the setting sun as we explored the rocky coast. I’m still not certain if the peculiar rock terrain is manmade or natural. It appears evenly scored as if by giant machinery and at the same time naturally eroded. And yet, this is in the edge of The Burren, which is known for this sort of unique, rocky landscape. Either way, it was treacherously beautiful. We walked back home in silence in the dying light. 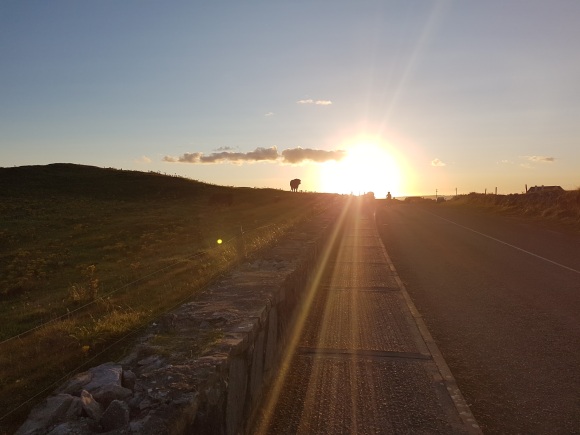