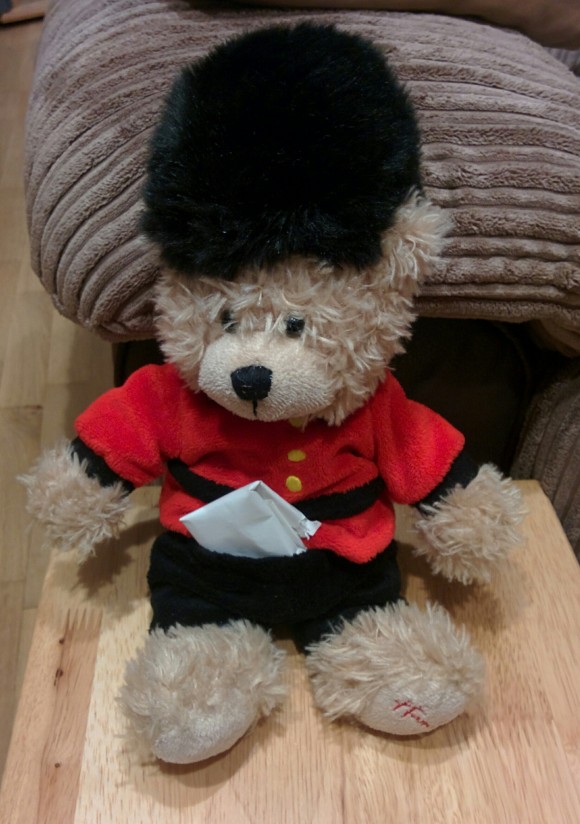 This is Guard Bear. You would have met him in an earlier post involving pandapants. He was a gift for Hawkeye from close friends, and his role is, obviously, to guard. He is also teaching Hawkeye how to salute with “yes, sir!”

As you may have gathered, we’ve been having a rather rough week, climaxing with the Mister requiring an overnight stay in A&E (that’s the ER for my American readers). He’s thankfully home now, but last night I was frantically throwing essential bits into a bag to send to him, trying to figure out through the haze of exhaustion what would be useful and uplifting. Aside from the practical essentials, I decided he needed a token from the two of us. I do actually have an object that acts pretty much as a lady’s token for her knight, given to him during periods of unwelcome separation. But it’s small and easily lost in a big bag. And since, for various circumstances, I wasn’t in a position to visit him myself yesterday evening, I decided to solve two problems at once. Hawkeye’s token became Guard Bear, as someone who is clearly able to look after and guard my knight in my absence. He also seemed like the best way to guard my own token. Because what’s the best way to ensure that something small and valuable doesn’t get lost? Why, wrap it in paper and stuff it down a bear’s pants, of course!

PS: In a demonstrable show of love, loyalty, and self-sacrifice, Guard Bear is now undergoing a thorough and brutal decontamination process in the washing machine. He may never be the same again, but such is the occupational hazard of the brave Ursidae that choose to dedicate their life to service as Guard Bears. We salute you.