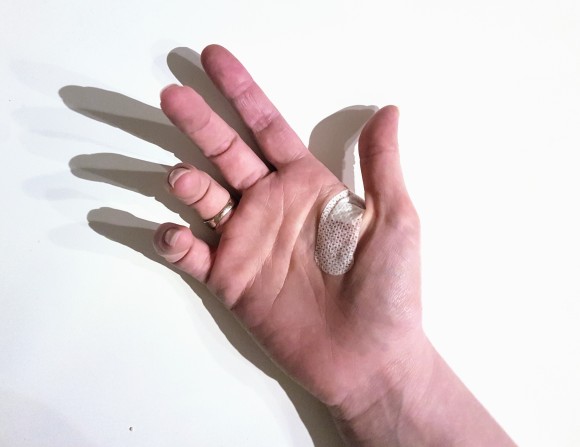 “Do you want a regular band aid or one of the finger strips?” I ask my boss, holding out a selection of plasters* and a small tube of antiseptic ointment.

“Oh my god, you have like a whole first aid kit in your handbag!” my boss exclaims, clutching a tissue to a bleeding paper cut while looking over my shoulder at my little plastic fold up wallet housing a large selection of different sized plasters and other paraphernalia.

“Well, I have a toddler that just learned how to walk, so I’m expecting scrapes and bruises to be a constant in my near future. See? I even have Garfield bandaids in here for fun.”

“It does make sense.”  She says, looking uncertain. “I think I’m ok, but thank you.”

I look at the tissue. “Yeah, I’m not having you bleed all over my stuff here. Here, take the bandaid.”

“Thank you” she says, peeling the backing off the plaster and carefully sticking it on her cut. “You’re so organised! I really should get a few. “

“Are you ok?” I ask uncertainly at the odd pair of young women walking in the opposite direction of me outside my office. One is hobbling along, being supported by the other. They’ve paused, leaning on pillar at the entrance to the safety tunnel running along the construction site adjacent to our office.

“Oh yeah. we’re fine.” The less-than-stable one says to me with a hint of a Spanish accent. I look down and she’s trying to walk with her foot half-way out of her thin-soled open sandal. I can see blood along the edge of her foot from a cut.

“Are you sure? I have some bandaids…”

“We don’t have very far to go…. ” her friend says, but the tone of her voice is uncertain and questioning.  It’s the kind of tone that says no but means yeah we probably could do with a hand…. I pull out the little pouch.

“Here, I’m not sure if I have something quite big enough, but I have some sterile wipes and you can take a couple of the bigger plasters, at least until you get where you’re going. There’s dust from the construction blowing everywhere. You’re not going to be able to keep that clean.”

The girls actually look relieved and gratefully take the offered products. They giggle at the sight of my plaster collection.

“Yeah I know, I’m like a walking pharmacy.” I deflect. “I have an 18 month to toddler so I’m always prepared for him falling all over the place.”

“Thank you!”  They repeated to me as they hobbled off.

“Hey, do you have any bandaids by any chance?” My other boss rushes up to my desk, arms full of large files which she piles on my desk. “These heels are killing me and I have to run to court soon.”

I reach down under my desk and fish around inside my handbag for my little pouch. “Do you want the normal bandaids or something a bit larger?” She leans over to take a look.

“Jaysus, what do no not have in there? Are those surgical strips?”

“Eh yeah,” I shrug casually. “They’re left over from when we wound up in A&E with Hawkeye after he fell down and cut his head. The doc who patched him up gave us some spare steri-strips”.

She rolls her eyes at me, fondly (I’d like to think). “The normal ones are fine, I just need to stop these things from rubbing at the back of my heels!”

“You’ll want to take these, they stick better.”

“Thanks!” She’s already peeling open the plasters and quickly slipping her shoes off.

“Rose, I need your fabulous medical supplies again.” The first boss is back. There’s a nasty, half-healed cut running along her left index finger.

I raise an eyebrow at her. “How do you not have already covered?”

“It’s stupid. I don’t want my husband to see it because he’ll just say ‘I told you so’ and I don’t want to give him that satisfaction.”

“Okaaaaay….” I pull out the same old pouch and hand the ointment to her. “And what was it that he told you so about?”

“I’m not going to tell you, you’re just going to agree with him,” she says petulantly to me, returning the ointment and taking the proffered plaster. I shake my head and roll my eyes.

“I really should get some plasters myself I just keep forgetting while I’m out of the house. It’s not fair that I keep using yours.”

Privately I agree but I shrug. Out loud I dismiss her concerns. “It’s ok. I started carrying this when Hawkeye began walking and falling all over the place  but this whole time I’ve actually never had to use it for him.”

“Oh for fuck’s sake,” I curse, slapping open the plastic wallet and shaking loose one of the plasters while sucking on the skin between my thumb and index finger.” I’ve just barely shrugged off my handbag and coat and my scarf is still trailing half way on my shoulders.

“Are you ok?” The Mister calls out from the kitchen.

“Yeah I just gave myself a super nasty paper cut at work in the worst place.” I tell him, and then continue to grumble curses until I get a plaster. Moving my hand is a bit awkward with the adhesive fabric and I fumble trying to stuff the plastic wallet back into the pouch to zip it.

“Ugh I don’t know why I even carry it,” I mutter to myself after giving up trying to put it back in correctly. “It’s not like Hawkeye’s ever needed it.” Instead I fish out the most recently purchased box of plasters and restock before having a second go at folding it away. Is there any point in carrying it all the time?

I wrinkle my nose. The temptation to reclaim the space in my handbag is there, but my hands move of their own accord. I force the zipper on the pouch closed and drop back into my hand bag. But not before removing the Garfield plasters. They’re useless at staying on. If it ever comes to it, Hawkeye will have do deal with boring ordinary ones.

* For my American readers, “BandAids” in Ireland and the UK are called “plasters”. I don’t tend to think about it much anymore and I’m used to hearing the word, but when I talk often the casual American term for it often slips out.