The last couple of weeks, my entry to and from our housing estate has been dominated by the heavily ripened rowan berries hanging above the gate (as well as other parts of the estate).

The name “rowan” is actually new to me exactly as of fifteen minutes ago. I have been idly composing this post in my head for a little while now, but it wasn’t until I sat down at my laptop to actually write that I looked up the English name of the tree, because I have always and forever (at least until today) known it as simply “рябина” (which transliterates to “rebina”). Or rather, I should clarify that I have actually heard of rowan trees before but I never paused to wonder what they were and have never made the connection. It you asked me what a rowan tree was yesterday I would have drawn a complete blank. A hardwood? Something out of folk stories?

Why am I writing about the rowan tree and its berries? Because it inevitably, every autumn, reminds me of my Russian childhood in the same way that purple lilacs do in the spring. In fact, the two memories form very neat bookends to the summer months. The smell of lilac mixed with rain instantly transports me to standing on our balcony in Russia looking out at the lilac trees across from the driveway immediately after a spring or early summer rain shower. The sight of rowan trees with the heavy clusters of red berries immediately reminds me collecting the fruit and stringing them with needle and thread to make necklaces in the autumn.

I love these memories. I have few enough of them from my time in Russia as I left the place fairly young, but they are all, for the most part, good ones. I had the wonderful luxury of childhood innocence and naivete which meant that I understood little of the political or economic issues of the time, although with my subsequent study of European history, I have been able to retrospectively put a lot of pieces together in my head that previously had little significance to me until they were given greater context. I remember the long queues for bread. The empty shelves in the butchers shop. My mother critically smelling each piece of available meat or fish to decide if it was of “first or second freshness”. Her then-mysterious refusal to buy my favourite fruits the summer of 1986 when they once again available in the markets. I remember my grandmother always carrying around a little netted bag called авоська (avos’ka) everywhere she went. While the bag itself is nothing special, the concept of авоська was a cultural Soviet phenomenon with the name loosely translating to a “just in case bag” or a “maybe bag”, in the sense of “I’ll just keep this bag in my coat pocket in case I get lucky and find some fresh bread”.

The expression of “second freshness” (второй свежести) is one of the most popular expressions to derive from a famous Russian novel Master and Margarita (Мастер и Маргарита) by Mikhail Bulgakov, one of the best Soviet satires as well as one of the greatest literary works of the 20th century. Written over the entire decade of the 1930s, the book did not see the light of day until a 1967 dissident самиздат (samizdat’, or illegal “self-published”) version which was still heavily modified from the original. The complete form wasn’t published until 1973. (While it is not well known outside of literary circles, its influence is quite widespread. Even I was surprised to hear that it is believed that the novel was the inspiration behind Mick Jagger’s song “Sympathy for the Devil”.)

All these things I learned and read many years after leaving the Soviet Union that gave a lot of my memories context. I have a memory of sitting at a kitchen table swinging my legs while my grandmother carefully flattened and folded brown paper into squares to cut and leave in the toilet because the availability of real toilet paper was irregular. I now know that razor blades were a luxury good. The Soviet economic model, not structured at all on supply and demand, instead instead revolved around a series of Five Year Plans first instituted by Stalin in the 1930s. Each Five Year Plan had a set of goals covering all economic sectors, from capital goods to transportation to basic household commodities. Targets were set in line with communist ideology and their completion was very high priority, which led to the inevitable corruption and lying by officials anxious to display “progress”. The heaviest focus was usually on power and capital goods, leaving consumer goods lagging behind, leading to things like toilet paper only being available in shops occasionally each month.

And this was just the economic reality my parents had to battle to look after their family. The political reality was even more stark – something I didn’t learn about until much, much later. And yet despite all this – a reality that is so far removed from my present day life that it feels like it belongs to a different person sometimes – I have fond memories of Russia. Of the deep frost making patterns on my bedroom window, actual heavy furs on my sled, the lilacs and the rowan berries, my grandmother working away at her cast iron Singer sewing mahine or singing while cooking in the kitchen. My father listening to the radio in the evenings. All these things are coloured with the innocence of childhood despite the heavy atmosphere of oppression and economic hardship.

So often when I pass by the lower hanging rowan tree branches I run my hands over the berries briefly and smile. These small things are one of the very few tangible connections that root me to my past. That does not mean that there are not many facets of my character that exist because of my particular background as a Russian emigré, but while these may be indelible, they are also all intangible. The physical reminders, like the rowan berries and lilac flowers, are talismans that represent the simplest but deepest core memories of my childhood.  A reminder of the good things that I keep because I was born Russian, despite the baggage that comes with such an identity.

And maybe, when Hawkeye is a few years older, he and I might spend a weekend afternoon in a garden stringing Rowan berry necklaces while I tell him about where Mama’s childhood roots are planted. 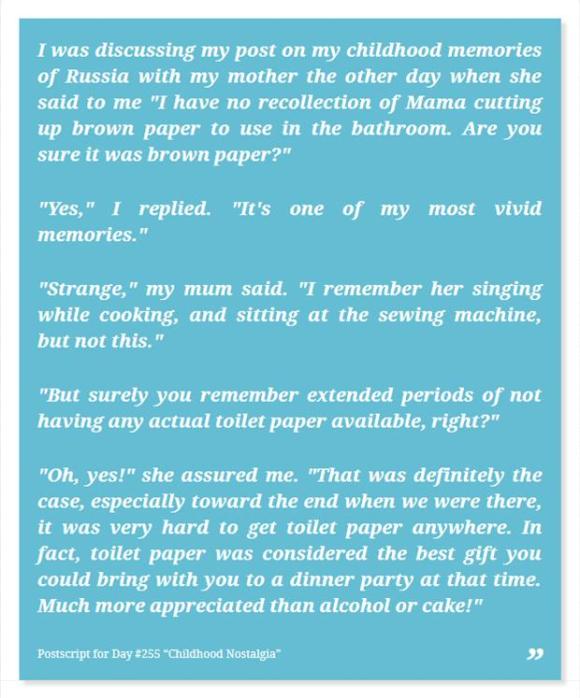