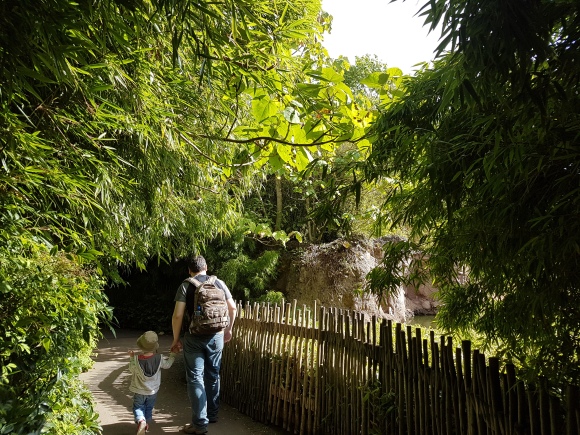 Here is the slightly belated second half of our weekend Dublin Zoo adventure. Leaving behind the fossils and the cold-blooded creatures, we followed the path to the Kaziranga Forest Trail,  which replicates the Asian rainforest habitat to house the zoo’s family of Asian elephants. The zoo has been running a very successful breeding programme, with the herd now numbering up to ten elephants, with the newest additions being born in March and May of this year.

The winding path is beautiful, lined with trees and thickly planted bamboo which sometimes forms a tunnel-like canopy overhead, breaking occasionally for a waterfall, or a strategic viewing point from which to observe the elephants. I remember sometime last year Ryan Tubridy interviewed a few zookeepers on his iconic Irish RTÉ Late Late Show. It was a fascinating insight into the evolution of the zoo, as the interviewees covered several generations, including a keeper who practically grew up in the zoo, following into the job on the footsteps of his father. He recalls a vastly different time when there was much less understanding of behavioural science and the mental well being of the animals in addition to their physical well being, and the importance of recreating suitable habitats. He described an incident when, for reasons I can no longer recall, his father ended up caring for a baby orangutan in his own house for a weekend before returning it to the zoo – something completely unthinkable today! A much younger, recently qualified, zookeeper talked about how the modernized zoo structures habitats as much as possible around the needs of the animals while still maintaining public access in a manner as unintrusive as possible. As one of the elephant keepers, she described how the elephants’ health is monitored daily, but this is done from behind a partition, allowing the animals to choose to walk away, or not approach at all if they do not wish to interact.

Nowhere is this approach more apparent than in their rebuilding of the gorilla enclosure.  In its previous incarnation, the somewhat outdoor limited landscape was built into a slope and surrounded by plexiglass on almost three sides, offering limited hiding places from prying eyes. However, a few years ago, the zoo opened its Gorilla rainforest – 12,000 square metres of lowland rainforest with dense vegetation for hiding as well as rocky outcrops and tall trees.  It was a fitting, lush, retirement for the patriarch of the gorilla family, a silverback named Harry, who spent 20 years in Dublin Zoo before passing away last year from a stroke at the ripe age of 29.

While this sort of landscape means that the animals are not always visible to visitors, it does introduce that wonderful element of surprise and change to each visit. For example we have always had good luck in getting a clear view of the Amur tigers, until this weekend, when they were rather scarce. Similarly, the gorillas were hiding somewhere this time around. However, my husband got some good photographs of the highly endangered bongos, while I finally, finally, got my first sighting (but not a good photograph) of the very elusive okapi, a creature thaat looks like something assembled from the spare parts of a donkey and a zebra. We also saw one of the grey wolves for the first time on Sunday. In all my visits over the years, the most I’ve seen of them are ears or snouts poking out from their cave niches. And sometimes you also get to see entertaining herd dynamics. Previously on this blog I had posted a video of two giraffes fighting. Today, they were having some other, quieter family drama. A family gathering seemed to be taking place on the hill, with just one of the giraffes sulking away from the rest of the herd. On the other side of the savanna the male ostrich sat regally, overseeing his harem of female ostriches strutting around him. In between the giraffe drama and the ostrich parade was neutral zebra territory. They didn’t seem concerned about either neighbour.

In this vein of the bounty of the unexpected wonder, this weekend’s exciting capture was watching a mama elephant playing with water and having her movements copied by the baby elephant. The baby wandered away before I shot the video, but the mama continued to play with the water. Did you know they can actually blow bubbles with their trunk?

And then at the other end of the zoo, the relocation of the gorillas to their own low lying rainforest meant expanded territory for the orangutans, who now inhabit both sides of the pedestrian walkway, with a rope bridge connecting the two zones far overhead. What does this mean in practice? Well, sometimes you can get lucky and see an orangtan crossing high above you. But more often than not, you see the male orangutan relaxing out in his back yard, observing the neighbours (gibbering twittering lemurs), sighing occasionally. All the way on the other side, across the rope bridge, about as far away as you can get, is clearly where his partner prefers to relax – sitting on her own stone porch over the water, looking almost like she is meditating. And further down, somewhere between the two areas, we spotted one of the young hiding out in the tall grass. Sometimes everyone in the family just needs their space, y’know?

Hawkeye tired toward the end of our visit, so the last third of his zoo adventure was spent on my back, enjoying the nowadays-rare experience. He excitedly pointed to all the animals from his high vantage point (also giving daddy a break from the constant up and down pick-me-ups). And in between he would rest his arms around me, often in a casual but slightly proprietary way, which is quite possibly the best feeling in the world.