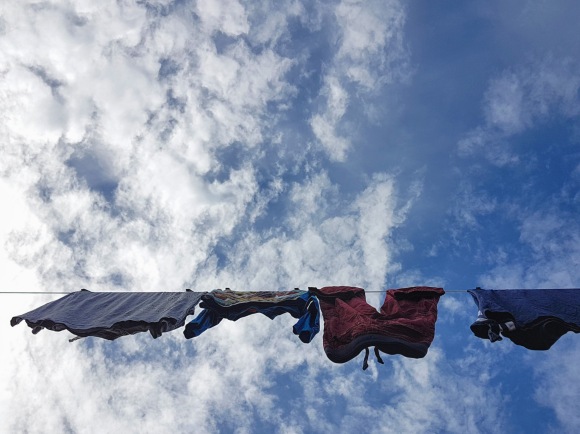 When we first moved into our house and it was a major topic of conversation whenever meeting friends and acquaintances, we naturally discussed what sort of maintenance and repairs were needed to be done initially. I was repeatedly warned, however, to not stress about “getting everything finished”.

“Sure, you’ll never actually finish doing everything. The house will never be finished. You’ll still be finding stuff to do in ten years.”

I was a bit puzzled by this because the advice generally fell into two categories of implied meaning. The first was that we would succumb to inertia after the initial immediate repairs were done. Something along the lines of “oh yeah, I’ve been meaning to redo the deck for years now but just haven’t gotten around to it”. The second was that I would never stop changing my mind and as soon as I finished making one change, I’d find something else to be unhappy about.

Now, all this was well-intentioned advice, but as with so many things in life, it came laden with some of these implied judgments and I really didn’t care much for them. Yes, inertia is a real fear. But I have something going for me which I didn’t have for the last 14 years renting – the feeling that comes with knowing I’m in my own house. That’s a powerful motivator. As for constantly being dissatisfied? I think that is misleading. The reason that a house can’t truly ever be “finished”, in my opinion, isn’t because of a home owner’s fickle nature or constant need for reinvention or distraction. It’s because a house, when it is a true home, is an extension of your own personality. As you grow and change, as you adapt and expand your sense of self, so your living space needs to change and adapt with it. Why should it be static? In my opinion, finishing a house in this manner is akin to achieving perfection – everyone strives for it, no one achieves it, and frankly the notion seems dreadfully boring. If everyone was perfect life really wouldn’t be all that interesting, you know?

Now, that doesn’t mean that your house constantly needs to be under major renovation. I am doing things in fits and starts as I find the time and motivation and budget. I’m ok with this. But working away at various projects while daydreaming about Big Plans for some years down the line? Yeah, I’m happy with that. 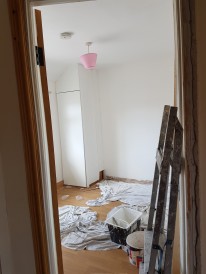 When we first moved in, The house was definitely in a turnkey condition but some things needed to be done immediately to make it more pleasant and livable with a then-three year old boy. First of all, we simply had to paint his room, which was came to us entirely coated in pink. Pink curtains, pink walls, pink lampshade, pink doorknobs on ancient white wardrobes…. It all had to go. We ripped out the wardrobes to expand the size of his room and painted it white. There is enough colour from his toys and bed linen and black IKEA KALLAX shelves with their red DRÖNA boxes to offset the stark walls, and they sit waiting for a year or two when I will look to decorate them according to his own imagination. 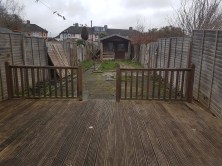 Also, we had to immediately tackle the rear garden. We were moving in late April and as the weather was warming we had to bring some sort of order to the chaos if we wanted to let Hawkeye out there safely. Now, the garden deserves its own post which I will write someday, so all I will say is that we put a significant chunk of our renovation budget into restoring it to some sort of basic order, just in time for the brilliant sunny weather to kick in to allow us to enjoy it from the luxury of our new deck chairs beside our new barbeque. Totally worthwhile. 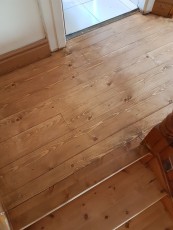 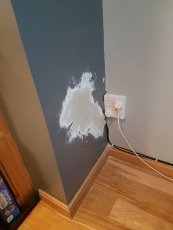 Those were the major things we had to get done. Front porch steps rebuilt for safety, the carpet removed from the stairs and the wooden surface repolished and varnished, the landing floor replaced, highly flammable 1950s ceiling tiles removed, etc. Other smaller items were taken care of along the way before a pause in any sort of home maintenance naturally fell as the seasons changed and the days got shorter and the energy levels followed. However, I still had some major items on my task list and as the temperatures dropped I was reminded that we still hadn’t gotten the attic insulated. In conjunction with the government winding down a tax incentive scheme for home repair I was freshly motivated to get a few more things finished. 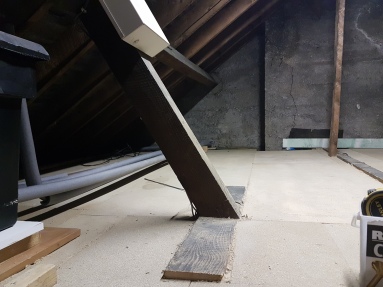 So just as the year was coming to a close we finally got the attic insulated and a basic floor laid to allow us significantly more storage. And while we had our handy fixer upper builder man in, I ticked a few more small things off our list. And you know what, I’m more excited about these than I think I was about anything else even though they’re relatively small. But you know what? They’re every day things that make life a bit easier. A bit brighter. A bit more convenient. And those are my favourite kinds of changes.

My cordless Dyson vacuum cleaner, instead of precariously leaning in a corner of the entryway and constantly threatening to fall down, is now securely mounted to the wall. Don’t laugh, but this makes me smile with glee whenever I enter the house! I am thinking of some sort of decorative solution to store the various attachments that don’t fit on the charging base. 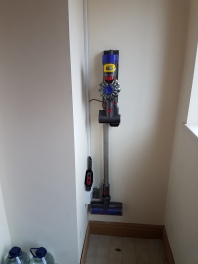 The toilet paper holder has finally been hung up within reach so that Hawkeye might finally be able to use the toilet completely on his own. The understairs cupboard where we keep the cat’s litter box has a kitty door now so that we don’t have to keep the whole cupboard door open for Mr. Darcy. The disused, rusted iron gates on the driveway have been removed so I can now get in and out of the rear passenger seat behind The Mister without needing to ask him to pull out of the drive way each and every time. Unidentified power and TV cables sprouting from an uneven hole in the plaster to the side of the chimney breast have been tidied up and routed discreetly. The kitchen clock is hanging. An outdoor tap is now available at the rear of the house so that we don’t have to choose between using the kitchen sink for cooking or for watering the grass outside (and having to keep the door open for the garden hose while we do it!) The kickboard under the kitchen cabinets, which has been residing in the shed since we moved in and bought a dishwasher whose door required lower clearance, is now back into place, custom carved with extra space beneath the cabinet housing the dishwasher to allow its use.

And most exciting of all, I have a vent in the kitchen for my new dryer. I have a dryer people. A FUNCTIONAL DRYER THAT ACTUALLY DRIES CLOTHES!!!

Now you might be laughing but I haven’t had a working dryer in about fourteen years. In Brussels we used a laundromat, and then we were in one rented apartment or another that only had space for a washing machine which doubled up as a condenser dryer.  Ladies and gentlemen, since moving to Europe I have yet to use a washer / condenser dryer combo unit that actually dried clothes rather than simply… redistributing the moisture more evenly through every stitch of fibre of clothing in the load. I quickly gave up on the notion of using the drying feature completely and clothes have been drying on airing racks ever since.

The previous July, when we all decamped to Doolin on a family holiday, I reveled in the luxury of hanging my laundry outside on the washing line and one of the first things I did in our new house after moving in properly was doing a load of washing and hanging it outside to dry. It was a fabulous dry summer and therefore lack of a dryer was not an issue until the cold autumn weather set in and the rains started. Paradoxically, even though our kitchen is bigger, we actually have less space for drying laundry indoors unless we want to park a second laundry rack in the middle of the living room floor and you know what? I don’t want that. I may not have been so bothered about it in a rental flat, but I was definitely not doing that here. The solution was, obviously to use a dryer and, lo and behold, one came with the house.

I mean, it spun and made all the right noises but there was no heat. I tried cleaning all the filters and bits that I could before giving up and relying on the washing line outside. But the weather forced me to return to the problem of what to do with a non-heating tumble dryer and when I looked up the model to decide if repairs were warranted I learned that it was, well… not under a recall, but under a strong manufacturer’s warning that specific maintenance was required to make sure that our particular used model was safe to use.

Maybe it was a good thing the heating element wasn’t working.

So off I went dryer shopping during the Black Friday sales. I knew from the beginning that it was going to be a vented dryer but I wasn’t 100% certain we had a vent. We checked out the exterior wall of the kitchen extension and there were vents, but it wasn’t clear which ones were open and functional. So I took a chance on a vented dryer on the logic that even if I didn’t have a vent, I wasn’t any worse off than having a dryer that didn’t work. All I had to do was get a vent put in.

As it happened, we didn’t have a vent. So the new dryer stood there, unused, for about a month before a vent was installed yesterday. So today was the maiden voyage of my Beko 8kg vented tumble dryer and can I just say how excited I am to no longer have to hang socks and underwear on a laundry rack to dry? This is huge, people!

What’s next? Oh lots of things. The rear exterior drains are going to be flushed out and unblocked next week. The flat extension roof will be sealed later this month. The chimney needs to be inspected. I want to get the electricity meter and switchboard moved to the other side of the wall into the front entryway from their current position at the bottom of the stairwell, exposed and ugly. The floors in the bedrooms need to be taken up and the joists checked and probably reinforced. The bathroom window needs to be replaced with something double glazed and while I’m at it, the whole bathroom should be tiled instead of having painted walls. The deck will need to be replaced eventually. Thinking bigger and further into the future, I want to add utility room and downstairs toilet next to the kitchen, consider a second storey extension to add a guest bedroom and/or renovate the attic into an office / craft room.

Will I ever be finished? Not bloody likely!

And I’m definitely ok with that. In the meantime, I’m going to keep smiling whenever I see the neatly hanging Dyson in the hallway.