“I heard The Mister is back in Galway tonight. Are you OK?”

“There’s a bottomless well of support, just so you know.”

“G told me last night. How are you doing?”

“You ok? I see a missed call. Phone has been dead for a few days. I heard about what happened. Is The Mister OK?”

“I don’t know what I can do from so far away, but if you need moral support, I’m here for you.”

“Come over for dinner tonight with Hawkeye.”

The messages came in pretty fast last week from friends and family, both near and far. Literally the day after we returned home from the holidays in the West, my husband was rushing back there to the dreaded waiting room vigil in a hospital. Friends and family converged around him and Aunt Strawberry. And, equally, around me.

Once upon a time, well before I got pregnant and found my social horizons shrinking down to just rushing to work and then to creche and then the occasional short weekend outing, I was happy to be that person helping out in a pinch. I didn’t always know what the right thing was to say or to do but the desire and energy was there to go the extra mile for my friends because that’s what friends do. Then Hawkeye came along and my world became a lot smaller. Parenting itself may have come naturally, but surviving parenting did not. I learned a lot of things about myself  and my own limits as a mother and my own person that first year. I learned I was not a stay-at-home mother, that loving your child unconditionally didn’t always come with chronic, unceasing euphoria about your new state of being that some people like to boast about. I learned that being selfish is sometimes completely necessary in order for you to be selfless in other ways. The last lesson has meant that I have lost that ability to drop everything and materialise at a friend’s side in a crisis. I can send my own messages of support, but when others were in crisis I could no longer summon forth the energy to drop everything and rush over, or even put everything down carefully, arrange child care, and then rush over.  The desire was still there, but the ability wasn’t. At least, not without compromising my own  recently recovered equilibrium essential to my day-to-day functioning. I had to be selfish with my friends in order to have the sort of selflessness needed to be a parent. I live for the day when I don’t have to make this compromise, when Hawkeye is older and his needs change enough that I can reclaim this part of myself, but that day has not yet come.

Perhaps that bit of self discovery was responsible for being somewhat unprepared for the overwhelming amount of support that rolled in in the wake of our family crisis. I might have lost my own ability to be there for others in the way I wish temporarily, but others were still there for me. Because that’s what friends do. I can only shake my head in wonder and promise to myself that someday I will pay this forward when I am in a position to do so. Because, again, that’s what friends do. I have to remind myself that it’s not a transaction, a balance of debt, a tally of how many times I help you in exchange for your help. The true gift of friendship is that help is there without expectation of payback because, if it is understood that if you’re able, you will return that gift in a similar fashion when necessary.

Ironically, the exact opposite can be required for parenting through a crisis. After the shock of the first wave of developments wore off, and the grim, exhausting wait for news set in, it became clear to us that our default, hard-wired response to crisis – to rush to be there at your partner’s side – was not possible. Hawkeye is three years old and his comprehension is limited to “Nana has a big sick” and “Daddy is away fixing Nana”. His world rests on the confidence that young children have when there is routine and familiarity. The absence of those things is only likely to lead to tantrums and other difficult behaviour at a time when The Mister and I are least able to cope with those. So the decision was obvious – the only place for me to be is at home in Dublin, keeping as much of our regular routine going as possible on my own with Hawkeye while my husband stays in Galway dealing with the immediate situation. He has his sister, and his family. I have my friends and, in a long distance fashion, my own family, to support ourselves.

But we do not have each other.

It’s a steep sacrifice but a necessary one. I grit my teeth and tamp down my frustration at feeling like I’m not able to help or do anything because I’m stuck being far away. I am doing something, I have to remind myself. I am looking after our son, making sure he’s fed and happy and rested and involved in his routine as much as possible, so that The Mister can concentrate on other immediate issues without also having to worry about what’s going on at home. He and I go to bed at night alone, missing our other half, but as we do our routine night night phone calls with Hawkeye and exchange endless messages throughout the day, we know we’re both doing the best we can and we are both exactly where we need to be. The weekend saw us come together overnight as I took the train with Hawkeye out west before returning to Dublin to start the week afresh, but while it was a comforting respite, it also highlighted the absence of each other in our life as we both struggle through day to day.

I have often heard it said in the early days, weeks, and months of Hawkeye’s infancy when I struggled with sleep deprivation and exhaustion, that “this too shall pass”. The same is true of now. Whatever the future holds, for better (as we pray) or for worse, life will return to normal and we will be back together as a family unit. Hawkeye will get older. Other friends will have crises. We will try to be there and catch them. There will always be a struggle and a balance between being necessarily selfish for your own health and selfless for your friends and family, and between sacrificing your own desires temporarily to do what is best for your child, and indulging in your own need for support as your own person and not just as someone’s parent.

So yes, I remind myself. This too shall pass. And in the meantime, thank you, everyone.

The Mapusaurus travelled with us on the train to Galway and tried to steal Hawkeye’s chips. Hawkeye was not pleased. A struggle ensued.

Later on the Mapusaurus tried to eat his raisins. Hawkeye wasn’t pleased with that either. 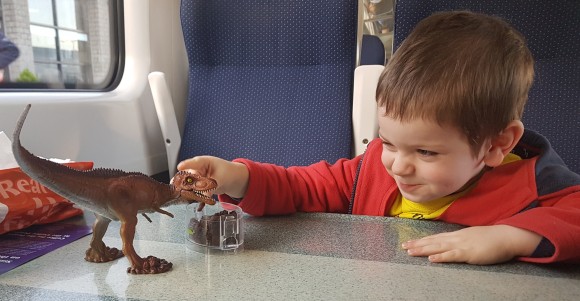