If you’re a parent you know that, no matter how hard you try to resist, you will inevitably imagine your child becoming an amazingly talented person in one profession or another whenever they do something cute that is an imitation of a grown up. It’s just impossible not to comment when you see your toddler playing with a stethoscope that maybe he’ll end up being a doctor, or joking about him being the next Kandinsky when he draws yet another scribble.

If you collect my own reckonings to date, Hawkeye has already shown that he could be a a world class football player (that’s soccer to my American folks); a professional rugby player, the next Kandinsky, a chef, a structural engineer (thank you, Lego!), and even a pole dancer.

My favourite, however, is when I’m convincing myself that he’s going to be a famous musician.

To be perfectly honest, our adventure at exposing Hawkeye to musical instruments began by accident. It was not about the music so much, as it was a challenge I threw down to The Mister to build a Lego guitar because our son was obsessed with guitars at that point because he insisted on us reading Tabby McTat to him several times a day.

Most of my friends and family would have seen the result of the challenge. He may have been only 26 months or so at the time, but he knew what to do with his hands right away. Shortly thereafter he got a chance chance to pluck a full size guitar before getting one a bit more matched to his size in the form of a ukulele. 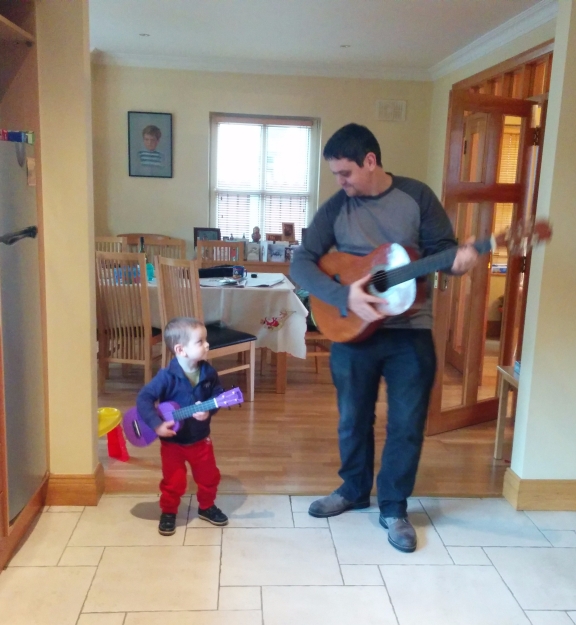 Just at the end of our holidays, my Irish sister in law got Hawkeye the gift of a basic musical set. I didn’t know whether to say thank you to her or poke fun at her for tormenting us on purpose with yet more noise making toys, but the truth is I was genuinely delighted.

So was Hakweye apparently, and he staged an impromptu concert to show off.