Some things, however, you just can’t predict or plan for. You can have everything as ready as possible, but at the end of the day what will really matter is that magic ingredient called luck.

Thursday evening The Mister did a quick late run over to Tesco because, aside from bread, we had a dire need to acquire a Christmas sweater for Hawkeye. Next day was his little Christmas party in creche and all the kids were being encouraged to arrive in Christmas jumpers. Not only that, but Rugby Tots were also having a little social media competition involving Christmas dress-up on the last class of the year, which was this morning.

So I prepared for the Christmas dress-up, sticking the newly-acquired Rudolph hoodie over Hawkeye’s RugbyTots shirt. I thought ahead to what kind of photo I would like to take of Hawkeye with his coaches and showed him how he could use his hands to pretend they were imaginary antlers. I even remembered to throw my bright red lipstick into my handbag this morning to colour his nose red.

This was as prepared as I was going to get. We went up to Coach James to pose for Hawkeye’s photo and he laughed at the red nose and crouched down while I snapped a few shots with my phone. Later, when I looked at the handful of photos I took, they all looked roughly similar in line with what I had imagined in my head. Cute, but nothing particularly special. 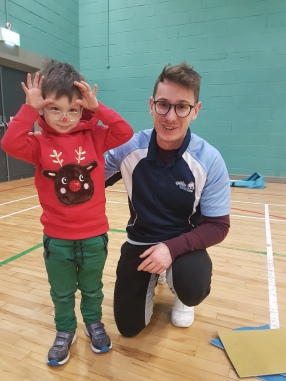 Except of course for that one photo where Hawkeye gives his coach that dubious side-eye. It’s priceless. It changes the entire image. And that is exactly the magic ingredient that you can’t plan for, that you can’t prepare in advance. I’m a complete amateur when it comes to photography, but I know that any professional photographer will say the same thing – you can prepare and set up your perfect shot as meticulously as possible, but in the end that one-in-a-million photograph capture will come down to being in the right place at the right time clicking the shutter at precisely the right nanosecond.

I have no idea if we’ll win a prize or not for the photo, but honestly I don’t think I care too much because just seeing the end result made me laugh. It’s an image that’s just begging for a caption.