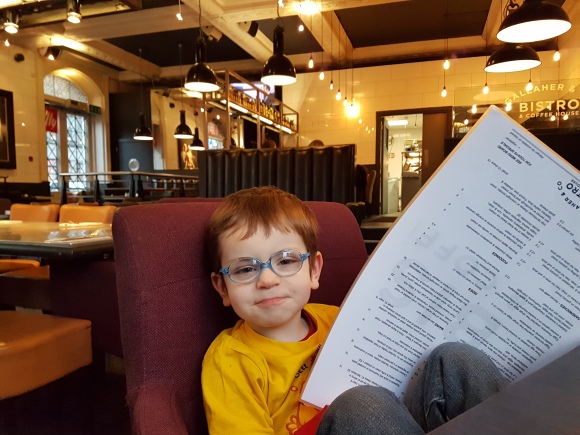 I may have been accidentally prophetic when I insisted on calling my bump “Hawkeye” after my favourite Marvel Avenger. Hawkeye does indeed appear have hawk eyes.

Back when he was much smaller, I remember trying to catch him playing with a little stuffed owl toy on video because it looked so adorable. He would hold the tiny wings in each hand and shake it rapidly up and down repeating “flap! flap! flap! flap! flap! flap!” As his arms weren’t very long though, the owl wasn’t far away and his eyes would cross a bit looking at the owl in front of him, which gave the whole image an extra cute feel.

It was less cute though when, last September, The Mister and I started noticing one of his eyes crossing more often. We turned to Dr. Google to diagnose the problem and whoa – turns out it’s one of those things that maybe you shouldn’t ignore. Very easy to correct when kids are small, harder to deal with if it’s left ignored until school age. One appointment with our GP later and we had a referral to a paediatric ophthalmologist. I heard numerous stories from other parents about how their kid’s cousin / playmate / neighbour had to wear a patch on one eye for a while but how the problem eventually fixed itself, etc etc. I listened and mentally prepared for pirate themes to connive Hawkeye’s cooperation with such an endeavour.

We finally got to see the ophthalmologist in January. The timing was less than ideal. On my own with The Mister away in Galway, there I was in the consultant’s clinic waiting room hell. It had been a rough night, though the reasons escape me at this point. Either insomnia reared its ugly head or else Hawkeye had a restless night keeping me awake till all hours. Whatever the cause, I was rapidly losing the will to stay awake in the stuffy waiting room. The toy collection had been culled since my last visit there, leading to a significantly smaller selection to keep Hawkeye entertained. The appointments were all running late, and I began running low on biscuits and snacks before we even set foot in the doctor’s office.

The ophthalmologist was an older, neat looking gentleman with a very soft, calm voice. So soft and calm that, in my attempts at making sure I had our coats, bags, scarves, hats, etc and didn’t forget to actually bring the child with me, I missed the introduction during the handshake. Following him into his office I was struck with a sudden sense of panic.

I had forgotten the guy’s name. I mean, it was on the appointment letter. We’ve had the appointment booked for months. He just introduced himself to me, but my sleep-deprived brain refused to reproduce the information on my demand. It was had a vaguely familiar feel to it, I could recall, and as I groped semi-blindly in the recesses of my mind while taking the chair in front of his desk I pulled out the closest name I could think of.

A nanosecond after the last words left my mouth I smacked my face with the palm of my hand. Flitwick. Seriously? Did I just call my son’s ophthalmologist after Harry Potter’s Charms professor at Hogwarts? Thankfully, Dr. Not-Flitwick did not even bat an eyelash at my faux pas. Judging by my company in the waiting room, harried, sleep-deprived parents are the norm for him.

“It’s Dr. Filtcroft,” he corrected me calmly and gently, before producing a little Minion figure from his desk.

Dr. Filtcroft, it turned out, had one of those soft-spoken quiet demeanours coupled with a somewhat posh accent that would not be out of place in a private university. This did not, however, stop him from seriously discussing the names of the various Minions with Hawkeye until he correctly named Stuart as the little figure. It should not have surprised me to discover in the middle of this conversation that Dr. Filtcroft even knew that Bob had one green eye and one  blue eye.

“Yes,” he confirmed while watching Hawkeye’s eyes follow Stuart’s form intently with the help of a flashlight. “That is correct. Bob has heterochromia.” Of course an ophthalmologist would know that.

Moving on from Minions, he discussed our observations of Hawkeye with me, all the while conducting various tests which, to me, resembled something hardly more logical than the caricatured Rorshach tests. However, my three-year-old’s barely comrehensible answers (“no seriously, did he say that’s a duck?”) clearly meant something to the medical professional.

“I’ve been hoping that he would inherit my husband’s obnoxiouosly perfect vision,” I had said to him during the exam while pushing my own glasses back up my nose. I recall flashes of awkward glasses and wearing patches first on one eye then the other back when I was five or six years old maybe. I have always been nearsighted with one eye being noticeably worse than the other.

After the last round of what-picture-is-this Dr. Filtcroft returned to his notes but then looked up at me and announced, in that mild-mannered voice of his that “he’s definitely inherited your eyesight, I’m afraid to tell you. He’s extremely long-sighted.”

I don’t know if it was the lack of sleep or the heat from the waiting room, or just me being slow-witted that day but I just stared at him in total confusion. The few remaining functional gears in my brain ground to a halt with a mentally loud, tortured screech. I was prepared for having to put eye patches on Hawkeye, varouis eye-strengthening exercises, maybe even to hear that he is also short sighted like me. The opposite problem did not even cross my mind.

“He is very long-sighted,” Dr. Filtcroft repeated patiently. “With some very mild astigmatism on one side. He’ll need glasses.”

It took a bit of time, but slowly, the brain cogs were unjammed and started spinning again. “So…” I ventured tentatively, trying to scope out this new territory, “instead of a pirate we’re going to have to turn him into a Minion?”

Last weekend we finally completed Hawkeye’s transformation into full Minion status. After a day and a half of not being very enamoured with the notion, Hawkeye took to them like a duck takes to water. Despite wearing them myself, I am not actually a fan of glasses. Everyone says how utterly adorable small kids look when they’re bespectacled, but I actually miss the look of his open face sometimes when I’m gazing on him. However, with any luck his eyesight will even out, especially if they fall under the influence of my own eyesight genes. In a few months we will be attending an orthoptist for an assessment of his progress, and I’ll be happy to report that Hawkeye wears his glasses all day with no encouragement required.

I did have to ask Dr. Filtcroft one final question though. “What’s an orthoptist?”

“It’s like a physiotherapist for the eyes.” He replied.

I think he may have been laughing at me by the end, but he was polite enough to keep it to himself. I was certainly laughing at myself the next day.

After ten hours of sleep. 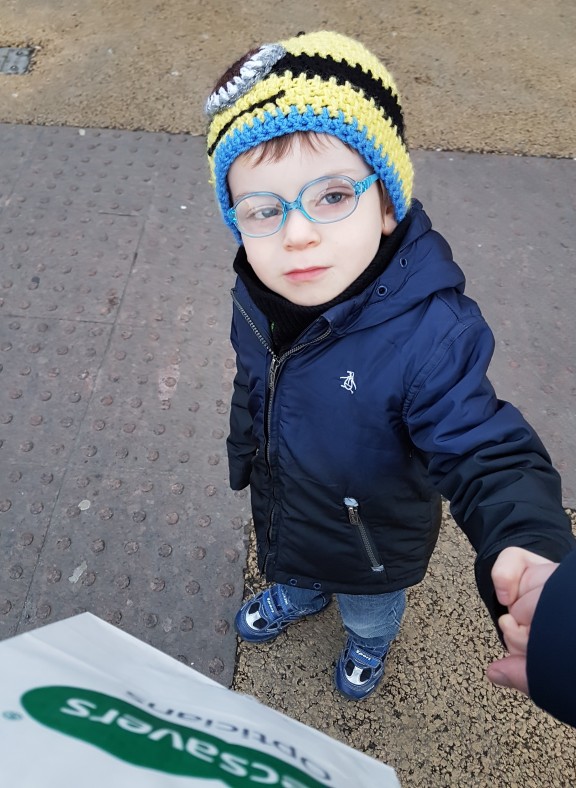 * While I don’t believe that Hawkeye / Clint Barton ever utters this phrase in the comics (collecively known as Marvel’s 616 Universe), I came to know the Avengers through the Marvel Cinematic Universe, though I did then move on to read some of the classic Marvel titles like the Ultimates and Matt Fraction and David Aja’s award-winning Hawkeye series. So I thought it was fitting to title this post with one of Hawkeye’s best-known lines from the movies.