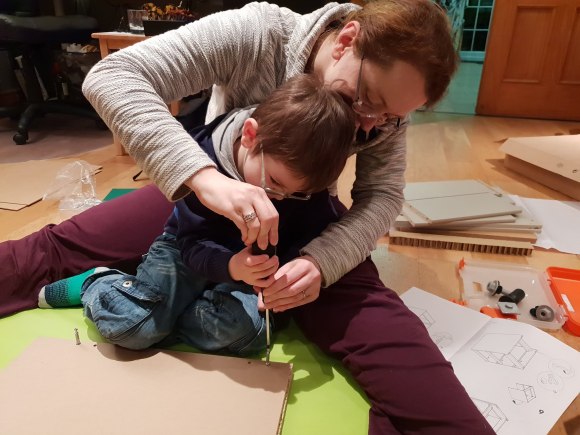 What’s more crazy than a writing challenge in December?

Making my husband go to IKEA on the last Sunday of November. Then returning to IKEA the following weekend (i.e. yesterday). For reasons people can’t quite fathom, many retailers in Ireland have jumped on the Black Friday Sale bandwagon coming out of America. The only problem is that there’s no economic logic to it in Ireland. It’s not a holiday weekend, and people aren’t likely to be glued to their couches recovering from a post-Thanksgiving food coma in Ireland, requiring the promise of ridiculous once-a-year sale prices to bestir people from their living rooms.

Now, IKEA doesn’t really do Black Friday any more than its usual sale offers, but that doesn’t mean people don’t flock there in droves anyway. So there’s me, and Hawkeye, and my husband, a man who notoriously dislikes having to navigate large crowds of inattentive shoppers with giant laden shopping carts and screaming children in tow. He also notoriously dislikes the IKEA signature shepherding through their showroom obstacle course and their deliberate manner of hiding all the short cuts and generally making it impossible to escape one you set your foot inside the showroom maze. However, his wife is apparently possessed of persuasive argument skills because lo and behold, we were making our way through the entire showroom floor, without any short cuts, checking out “big boy beds” for Hawkeye while surrounded by a sea of humanity.

The “big boy bed” notion was actually a way to sell the idea to our son that we need to upgrade his cot bed to something that, in a pinch, we could convert to a double bed for guests since we don’t have an actual guest bedroom. For this task, no place is better than the grand masters of small living spaces on a budget. So there we were, checking out the TARVA day bed. And while we were there, a matching MALM bedside locker for me to replace the free one we started out with that was frustrating me. And a few more bits for Hawkeye’s toy kitchen, and of course mattresses. Oh, and the meatballs!

Suffice it to say that by the time we were in the warehouse section, going down endless rows of industrial shelving to locate the required boxes, Hawkeye was fairly exhausted. He planted himself on the flatbed trolley and declared himself to be a “delivery” while The Mister was glowering at everyone around him. Did I say “glowering”? That’s actually his normal resting face when in crowds. However, while I may have been victorious in arranging for the expedition, I also know when it’s time to beat a hasty retreat, so we skipped the Marketplace and went home having collected all the heavy goods. 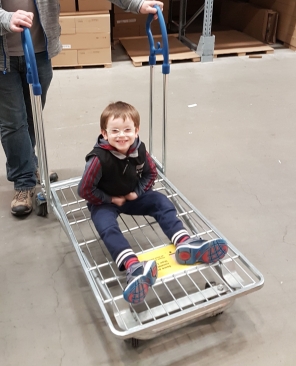 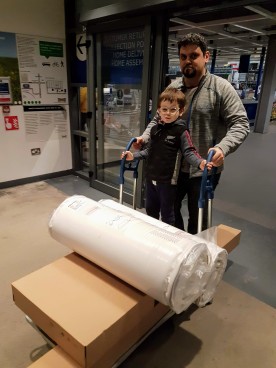 Unfortunately, this meant that I forgot the bedding for the new single bed we now have. Or rather, the two single beds we now have hidden in one. Sure no problem, I thought during the week. I’ll just pop into one of the shops in the city centre. Of course, that was before I remembered that IKEA size singles aren’t the same as any other standard size singles, so I tactfully suggested yesterday that The Mister let me go to IKEA on my own on the bus, and he can come collect me in the car with Hawkeye in a couple of hours after I finished doing all the hard stuff. i.e. traversing the halls of IKEA once more. Win/win scenario as far as I’m concerned.

I did go into the place with some trepidation because I was nursing a fairly large headache but it turns out that IKEA with a set of noise-cancelling earphones is actually a pretty fun place to be, even when its brimming with people doing their holiday shopping. With the general roar of all that background noise muted, the endless talking, crying children, echos off the concrete and steel warehouse structure, it was like floating through the place in a bubble. I didn’t even put any music on.  It was actually kind of… relaxing? It’s been a long time since I’ve been in IKEA without feeling rushed. 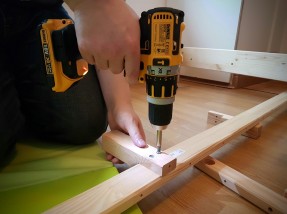 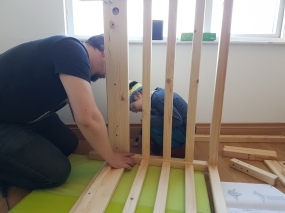 In any event, the result of this two weekend IKEA bender was that yesterday evening and most of today turned into assembly time. I have to say the cleverness of those IKEA designers never ceases to amaze me as I watch a bunch of unvarnished planks out of a small box come together to form an entire bed. Once again, The Mister was heroic in his efforts. Plus, you know, it gave him an excuse to bust out the power tools. And the little MALM bedside locker turned into a fun project with Hawkeye. We actually got surprisingly far with his little plastic DUKTIG IKEA toy hammer before mommy had to bust out the real hammer toward the end of the project where actual nails were involved. All this was of course done to the tune of the Bob the Builder theme song “Can we fix it, yes we can!” sung cheerfully by Hawkeye. 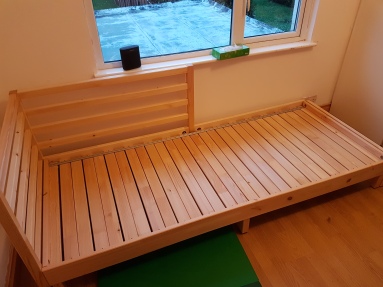 Hawkeye has now fallen asleep in his big boy bed, his room entirely rearranged to accommodate the bigger piece of furniture. The recycling bin is full of folded up cardboard boxes, and I’m busy plotting what I can buy from IKEA next time I dare venture in there with The Mister.