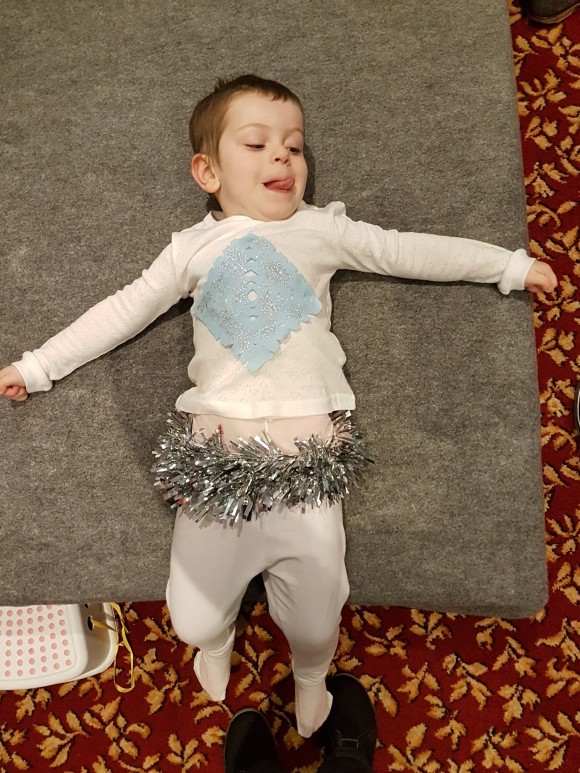 Despite having a fairly large vocabulary at this stage, communication with a three year old is still hard work. There is much he does not understand in terms of context and there is much we don’t understand about what goes on in his head to put his answers into the correct context. As such, I have not had any idea what to expect from our very first Christmas concert as parents. Down to not even knowing what costume the staff members had planned for him.

The answer is that he was dressed up as a snowflake.

So here’s the deal with children’s Christmas concerts that I can now share having weathered my first one. They’re amazing and brutal at the same time. If it’s not your child up there singing their little heart out off-key, bouncing from side to side while he is meant to be still, calling out to you in the midst of a performance or actually running off stage in a parent’s arms, and so forth, then sitting through a whole one is, in my opinion, pretty torturous. I mean, let’s be totally honest here. You probably can’t make out half the words of what’s being said or sung. You’re doing well if you can recognise the tune. There are parents hanging off the chairs, walls, light fixtures, and any other available surface with their phones and cameras. There are never enough seats for everyone, and if you do have a seat but it’s not in the front rows you probably can’t see anything anyway.

But when it’s your own kid? Aww man….. All of the above is still true, but you know what? That doesn’t matter. You sit there, peering over the heads of all the parents in front of you, or you stand there, hanging off the chairs, walls, light fixtures, or any other available surface with your phone out to record all the precious moments, and your heart just swells with so much love as you zero in on the one face in there that makes it all worthwhile. And even when he’s on the side lines because it’s the turn of other  groups of children to present something, that overwhelming sense of love and warmth makes it possible to smile and laugh in delight at the antics of eight three-year-olds in white and red costumes as they stumble through the toddler versions of pliées and pirouettes during the ballet portion of the concert, or the half-unintelliglble recitation by the slightly older children of The Stick Man story in very inventive costumes put together by the staff.

And a lot of Hawkeye’s recent antics at home make a lot of sense now – from his endless singing of “tra-la-la” to the unexpected and unprompted lines from Stick Man even though we haven’t touched he book in a while.

I am still sorting my way from the piles of video I took to weed out a good clip or two that would be best to send to friends and family but I know that the majority is not of interest to anyone outside of that room.

And that’s ok. It is as it should be.