I ventured into an arts and crafts store this weekend and walked out with a giant armful of stuff to experiment with for toddler craft projects. We’d done stuff like this outside of the home, such as workshops at the National Gallery of Ireland or The Ark, but at home we have mostly stuck to markers, stamps, and stickers. Part of the issue is that directing a toddler in a creative project with a constructive result takes a HUGE amount of forethought, planning, preparation, and most of all, patience. It’s not so difficult if the objective is just to let them mess around and create a … well… mess, but while his Montessori creche does incorporate a certain amount of messy play, I can tell from all the items he’s brought home and what they have decorating their walls, that most of their arts and crafts are guided toward a specific goal.

Also, I’m somewhat allergic to toddler messes. I know, it’s not an ideal condition to suffer when you are the parent of a toddler. But I just… I just can’t. I can, to a certain degree, restrict myself from trying to do the damn thing for him if the project is a bit advanced. It’s hard. I’m a bit of a perfectionist. I want to teach him how to do it just so. Most of the time though, I can stop myself. Most of the time. But watching him make a mess and not doing anything about it is harder for me.

So we have stayed away from messier stuff for the moment from a combination of mess aversion and just sheer lack of energy. I finally decided to take the plunge however. So having loaded up on supplies, I started to execute the next part of the toddler arts and crafts plan – preparing materials. Doing this on the go is usually a terrible idea. Hawkeye wouldn’t have the patience to wait for me. Also, he would try and take the scissors. And the glue. And in fact he’d just generally make it impossible for you to do anything if he couldn’t also do it. So I decided to start with something basic. I took a sample of the various materials purchased or had around the house – yarn, pipe cleaners, cord, tissue paper, felt, etc, and chopped them up into smaller pieces. These were organised into a repurposed tea box with convenient dividers. (For those of you who don’t know me, I have a box… thing. A fetish. I love boxes. I love organising stuff in boxes. Nice wooden boxes are a particular weakness of mine, so doing this for me is like indulging in organisational porn.)

Then, I slapped down some double-sided tape onto a piece of card, laid out piles of each type of material on the table, and let Hawkeye go to town on the “sticky”.

I learned several things from this experience. He has to be in a patient mood. If he’s so full of energy that he can’t keep his bum on the seat for more than two minutes, it’s probably not a good time to do an arts and crafts project. Also, I realised that while mixing everything up is fun if you’re just going for a bright mess of colour and texture, if I want to go for more guided projects I will need to organise materials by colour as well. I have in mind to arrange double sided tape in various shapes and designs on the card, and then slowly peel off individual pieces and let Hawkeye decide what colour/material to apply to each sticky segment. That would allow him to build a design rather than just free play. Not that there’s anything wrong with free play like this, but some variety would be welcome, certainly for me, plus he can learn about design and colour selection. 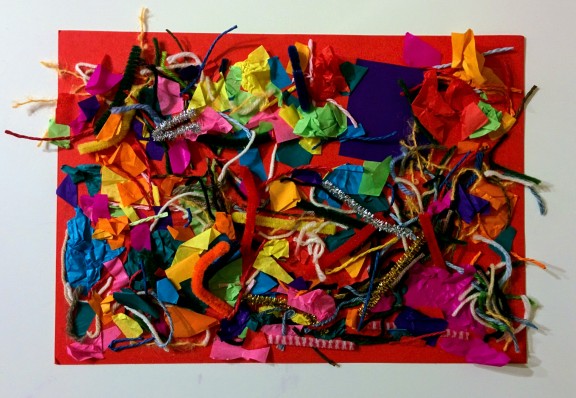 Also, I was definitely right in giving him only a small amount of everything. He is still very young and his preference is to just sweep everything up into two fistfuls and throw it at the surface of his work space. Almost everything ended up on the floor at least once if not several times.

Still, the end result is pretty neat and the process was fun for him, and only mildly stressful for me, given that I was not at my most patient on the day that was in it. That’s pretty much a win in my book. We are going on holiday soon and some of these supplies are definitely going to come with us.