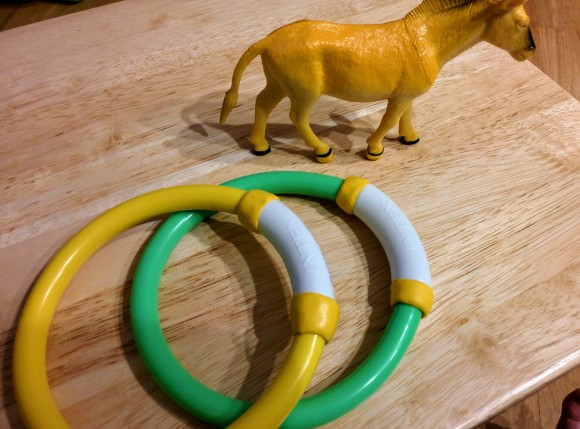 I had some more fun with Sugru this weekend on foot of my previous success with this fun substance. The problem with it is that once opened, an individual pack of Sugru doesn’t last more than a day, so I have been reluctant to experiment on small projects, not wanting to waste the stuff. However, we recently bought some very cheap diving rings for Hawkeye to use in the pool. I mean, really cheap. They do the job but on the very first outing Hawkeye accidentally threw one against the pool side, and it cracked immediately. A second dive ring which also bounced off the edge of the pool also showed a potential crack at the join. (He’s not yet three, ok? We’re working on his aim.)

Rather than tossing out the broken ring I decided to bust out the Sugru and also try a couple of other projects I had in mind.

I preemptively reinforced the cracked diving ring first to use for practice before attempting to fix the completely broken one. After a full day of drying, the ring appears to be fairly solid. There’s no give on gentle pulling and wiggling. I’m not going to try and bounce it off the concrete again just to test the theory, but it will certainly be put back into service on our next trip to the pool. 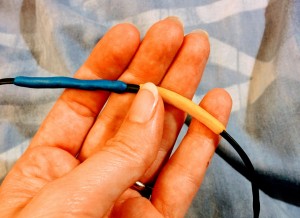 With the spare bits of yellow Sugru I fixed another small weak spot on my phone charger. This stuff is waaaaay more fun that electrical tape! I also affixed a little hour glass timer to the tiles in the bathroom for Hawkeye to use when brushing teeth. Finally, I set to work on his farm donkey.

The poor creature came out of a bag of plastic farm animals. The horse, sheep, cow, and pig, are all able to stand properly, but the donkey was lame from the beginning. The mold used to cast the figure was clearly defective, with the legs on one side shorter than the other and slightly bent inward, adding instability to an already bad flaw.

So I gave the donkey lifts. The surgery went very well, and I’m pleased to report that the donkey is now able to stand on his own four feet independently. Hawkeye was pleased by this improvement, parading the donkey around endlessly. 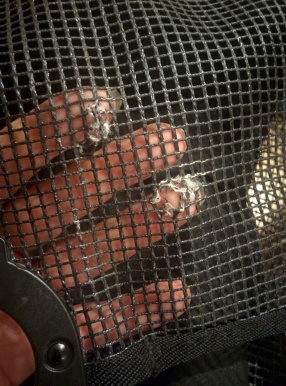 Finally, I used a whole packet of black Sugru to mend the shopping basket attached to the underside of our Quinny stroller. The stroller has been serving us well since Robin’s birth, but I recently noted that there were spots on the mesh of the basket that must come in regular friction with four protruding points on the chassis, causing fraying and holes to appear. Since the thing sees daily use I am very curious to see how the fix stands up to daily wear and tear. I don’t doubt the Sugru will hold, but I am wondering if the mesh will instead start to fray around the edges of the patches.

Will have to plot the next set of projects. This stuff is too fun to resist!

* No donkeys were harmed in the making of this post.